The “Richard Dean Anderson” panel on Friday at 1PM kicked off with tremendous applause at the star’s entrance.  The program followed a Q&A format, with runners distributing paper and pencils for questions and then delivering them to the moderator.

Asked for his impressions of Dragon*Con, Richard Dean Anderson said he had been to Atlanta once before, shooting a “movie of the week type thing,” and loved the city.  He stayed in Buckhead, went out walking a lot, and attended a hockey game. 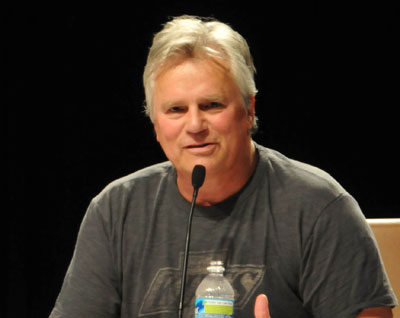 The question “What do you have in your pockets, and can you build a nuclear reactor with it?” elicited laughter from the audience and a “Really?” with an incredulous look and a grin from Anderson.  He said he’d emptied his pockets before coming onstage, and then segued into a discussion of his short-lived western series, Legend.  “The concept of the show,” he said, “was to stretch the truth in solving problems, not use the formulaic gun.”  Noting that Legend premiered the same season as The A-Team and “there wasn’t anything they didn’t shoot,” he felt Legend had “found our niche.”

Responding to the question of which side of the camera he preferred, Anderson said he hadn’t started producing until Stargate SG-1 but then was ready to do other things than be in front of the camera.  He then listed his various injuries, many of them suffered while filming MacGyver.  He added that he can’t resist fiddling with objects, including Swiss Army knives, and suffered numerous, and sometimes serious, finger cuts as a result. By the time MacGyver ended, his hands were too “gnarly” for close-ups, so the show hired his brother to do those shots.

One questioner wanted to know whether MacGyver or Col. Jack O’Neil was closer to Anderson’s personality.  The actor replied by choosing Nicodemus Legend, describing the character as a compilation of Anderson’s imagination and paternal grandfather’s traits.  He found Legend to be “the most fun in front of a camera” and added that O’Neil had Anderson’s sense of humor,  “snarky, sardonic, and cynical.”  MacGyver, he said, was “too polite.”

When asked why he thought Stargate SG-1 was so successful, Anderson paid homage to the Stargate movie, saying it “brought an audience in,” and those fans had tuned into the series right away.  He said he’d been hired for the show in part to draw fans interested in what MacGyver was doing next and the combination of fan bases gave the series a good start.  He went on to credit the cast’s “camaraderie, cohesiveness, and sense of play,” believing audiences were “comfortable with that.”

Anderson added that he tried to keep things loose on the set, in part for the sake of the crew, who worked long hours.  The cast, he said, had it easiest during the work day, and he wanted everyone to enjoy coming to work on the show.

He said he would like to say “maybe” in response to a question about the likelihood of future Stargate SG-1 projects but didn’t think there was a high probability of one.

Asked whether his early employment at Marineland influenced his choice of Sea Shepherd as a charity, Anderson said it had not, that his interest in the organization had begun with meeting Captain Paul Watson in Alaska and hearing him speak with passion about the oceans, especially his campaigns to save whales.  Watson stirred Anderson’s interest, spurring the actor to research the subject and ultimately hooking him.  Anderson also mentioned Water Keepers and Art of the Brain.  He added that all fees he earns at conventions go to the charities he supports although it has to be funneled through him for business reasons.

Noting that Anderson was a “prominent character crush” for Patti and Selma on The Simpsons, a questioner asked how the actor felt about that.  He replied that his involvement arose when Dan Castellaneta, who supplied the voice of Homer, was a guest on Stargate SG-1.  Anderson ate lunch with Castellaneta during his guest stint, and the Simpsons star asked if he would be interested in doing an episode.

Asked whether he ever missed his mullet, Anderson replied, over laughter, “Not on my head.  What I miss about it is, possibly, the ability to grow it.”  The laughter grew louder.  Anderson and the moderator then asked whether anyone in the room had a mullet.  No one owned up to one.

A questioner wanted to know whether Anderson would return to any of his earlier roles if the opportunity arose.  He chose Nicodemus Legend.

Anderson responded to a question about whether he missed doing a long-term character by saying that he does and has only recently been affected by that.  His status as a single dad influenced his departure from Stargate SG-1.  His daughter was then about 18 months old, and he had to negotiate absences from the show.  She is now 14 and said to him, “Dad, I’m okay now.  You can go back to work if you want.”  Smiling, he said, “My kid gets it.”  He added, “I’ll be looking for work soon.  I love the process of making a series.”

Anderson answered a question about what technology from Stargate SG-1 he would like to have by choosing invisibility and time travel.

The last questioner asked if Anderson had particularly fond memories of the late Don S. Davis, who played General Hammond on Stargate SG-1.  Anderson responded, “Don was one of the most lovely gentlemen I’ve ever gotten to work with” and “the most effusively complimentary person” but with “nothing that was not genuine.”  He also described Davis as a “straightforward good old boy,” adding that he could listen to Davis “all day long weave stories of the Ozarks.”  Anderson added that his MacGyver costar, the late Dana Elcar, shared many of the same traits.