Undead or alive, English or American, in Buffy or in Angel, Juliet Landau and James Marsters ooze chemistry and charm. On Sunday 2:30PM, the talented duo offered humor, wisdom, and a dash of vampy creepiness to the packed Westin Peachtree Ballroom. 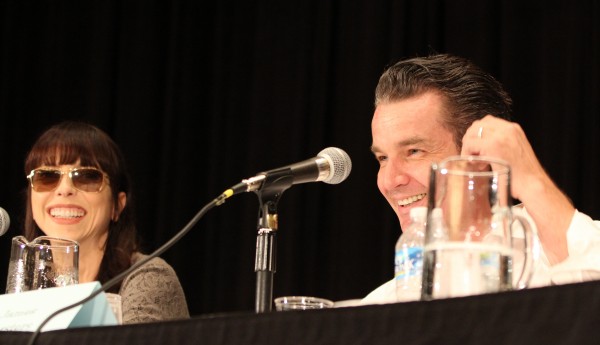 Though they’re Buffy villains, Spike and Drusilla won plenty of hearts. “In Joss [Whedon]’s world, vampires were metaphors for problems that you overcome,” Marsters pointed out, “so I think he was a little uncomfortable with people liking us!” Landau recalled Whedon telling her that he envisioned Spike and Drusilla as vampire Sid [Vicious] and Nancy [Spungen]. In Landau’s mind, “I was Sid—and he was Nancy!”

Punk-rock stars and villains have more fun, it seems. “When you’re the hero, you’re always having to feel guilty about something,” Marsters said. “You’re always running from A to B, sweating, feeling guilty. Whereas if you’re the villain, you’re just lurking in an alleyway, waiting for the hero to run by—and then you pop him in the head and you go home. It’s easy!”

With true villainous ease, Marsters and Landau slipped back into their characters to indulge the room with a thirty-second impression of Spike and Dru. What would really happen if the vampire power couple came to Dragon*Con, though? “Happy meals, baby, happy meals,” Marsters confirmed. Landau laughed, chastising him:  “We can’t eat our fans!”

Given that both actors maintain successful careers in theater, that couple might just be onstage. Marsters piqued Landau’s interest when he described the play Kvetch by Steven Berkoff, about a couple with no social life who breaks the fourth wall to whine to the audience. I’m sure hoping Landau reads it.