Thursday night, the Atlanta Braves hosted Dragon Con Night at Turner Field. A portion of the ticket sales will benefit the official 2013 Dragon Con charities: Noah’s Ark Animal Sanctuary, Georgia Conservancy, and Marcus Autism Center. Tickets were available at almost all levels of the stadium, and before the game, costumed attendees were invited to participate in a parade around the field. 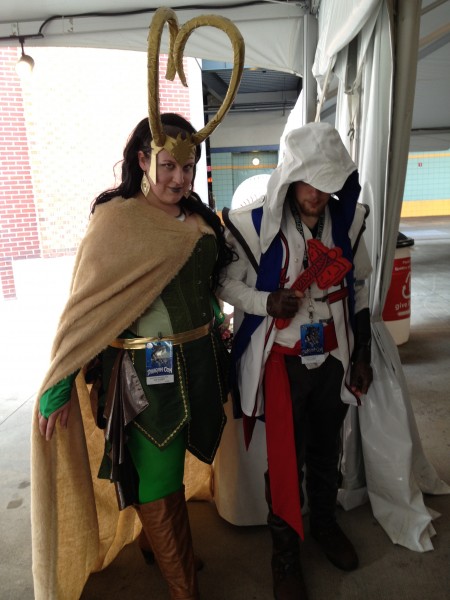 Gathering on the Hank Aaron ramp, parade participants milled around, admiring each other’s costumes before being led around the field by Lou Ferrigno. I had a chance to speak with several of the participants before they were ushered into place. Some participants were there mostly because someone else talked them into it. Others were there because they either were not going to be marching in the Annual Dragon Con Parade or were going to be marching in the parade with a different costume. But some people came because they both love baseball and they love costuming.

“I love baseball–I have since I was little–so getting to come in costume and walk around the field is a good benefit,” said Jared Hughes. He was dressed as a character he developed, a custom Mandalorian named Ceiren Mordha. Hughes was accompanied by Sam, cosplaying as a female Bilbo Baggins, Hobbit feet and all. Like several of the participants, Sam sewed and constructed every piece of her costume herself.

“Altogether, this took me a couple of weeks,” said Julie Garner who custom made her own Loki costume, using brass rods and foam to keep the horns on her headpiece from drooping. She attended the game with her brother, cosplaying as Connor Davenport from Assassin’s Creed.

Approximately 50 costumed attendees kicked off the night with the parade, which was followed by Liam McIntyre throwing out the ceremonial first pitch and Lucy Lawless starting the game with the traditional shout of “Play Ball!” As of Tuesday night, over 400 tickets had been sold for the game, with more still available.

Kris Medlen (ERA 3.74) pitched for the Braves, leading them to a 3-1 victory over Cleveland Indians’s Ubaldo Jimenez (ERA 3.95). During the game, corner outfielder Justin Upton was hit on the hand with a 92-mph pitch from Jimenez, taking him out of the game. With Thursday’s victory, the Braves sweep the three-game series with the Indians. Friday night, the Braves will start a series against the Miami Marlins.