Noah’s Ark was founded in 1978 by Jama Hedgecoth. She is assisted by Charlie Hedgecoth, and his wife, Allison, with the loving attention of their dog, Yani (who will happily plaster you with sloppy dog kisses, given half a chance). Noah’s Ark was intended to be an animal sanctuary as well as a place where people could come see the animals for free.

The sanctuary has an amazing range of animals, including bears, tigers, wolves, monkeys, apes, alligators, mountain lions, emu’s and parrots.

Noah’s Ark is not a zoo, though. Most of the animals are rescues or have been confiscated by the authorities from owners who either did not know how to look after them or were just out to exploit them. Many petting zoos for exotic cats, for example, don’t know what to do with the cats once they outgrow the cute-and-cuddly stage. Noah’s Ark provides a home for these animals.

Some of the animals have problems when they arrive.  A tiger named Gabby, when first homed in her enclosure, would charge the  fence and go to the bathroom all over herself whenever she saw humans watching her. After two years of TLC from the amazing staff at Noah’s Ark, she feels comfortable and no longer sees them humans as an immediate threat.

Two of the Ark’s oddest pairings are Anne and Doc, and Baloo, Shere Khan and Simba.

Anne is a 150 lb black bear and lives with her 500 lb tiger-buddy Doc. They can often be seen playing with each other or with Doc watching over Anne as she grooms herself near the fence. Anne’s not really that motley–she’s just molting her winter coat for summer. And she completely rules the enclosure!

Baloo and Shere Khan are nearly inseparable. According to the

park’s staff, Baloo is an amazing listener and for the price of cookies will happily let you spill your heart to a highly sympathetic ear. This accounts for the massive presence Baloo projects, sitting with an amiable expression.  Meanwhile, Shere Khan paces up and down the fence, pausing only to rub up against Baloo, while Simba sits back and watches with royal dignity.

Thunder (the alpha of their little pack), Lightning, and Apollo are the resident wolves.  The grace and elegance of these beautiful creatures as they lope from one end of the enclosure to the other leaves one aching to watch them streaking across an open plain or all bundled up into a big ol’ wolf-pile as they play.

It is one thing to read about such a place, but it is an amazing experience to see these animals living together and hear their stories. The work done by Noah’s Ark is simply beyond description. The deep love of the staff for the animals comes through clearly in the care taken to tailor the enclosures, diets, training, therapies, and medications to the specific needs of each animal.

Noah’s Ark is an amazing charity organization with an important mission and a reputation few can match. They can use every dollar possible and deserve our unstinting support. Their food bill alone tops $33,000 a month.

New USDA regulations require them to double the height of the existing enclosures from 8 ft to 16 ft. Hundreds of feet of fencing must be raised, which is going to cost tens of thousands of dollars. Noah’s Ark can use every dollar we can raise for them. To find out more, visit them on Facebook.

Please be sure to visit Dragon Con’s charity events throughout the weekend to participate in raising funds for this important charity and their wonderful work. The four charity events are staggered over Saturday and Sunday. You can find more information on the when-and-where’s here.

PS: Tigers are dangerous from BOTH ends! This side can be dangerous at six feet or more! 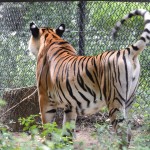 After a lifetime of science fiction and fantasy influences, the last twenty of which have been spent in IT, Geoff Termorshuizen is applying for his Ph.D. in Strategic Security after finishing a B.A in Political Science and M.Sc.'s in Cyber Security and MIS. He currently works as a technical consultant for ACI Worldwide, supporting security and financial payment systems. You can find him at Con either at the the DailyDragon room, or via the EFF track where he has presented panels on digital forensics, privacy, cyberwar, surveillance and technology related politics.