Fresh from the start of a highly successful tour with the 1982 animated film based on his book The Last Unicorn, author-screenwriter Peter S. Beagle will provide live, and undoubtedly lively, commentary at the film’s screening for the Young Adult Literature (YA) track on Saturday, 5:30PM, International N (Hy). 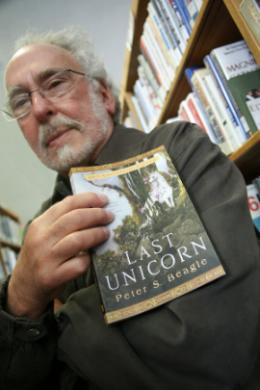 The 2010 settlement of an eight-year dispute over unpaid royalties opened up all kinds of new opportunities for The Last Unicorn, including a worldwide movie theater tour of the classic film that will continue through the end of 2015. For the first time in decades, the film is being shown on the big screen—featuring a gorgeous new 2K Digital Cinema print, with Beagle available for audience Q&A, book signing, and other special screening fun. (See Last Unicorn Tour for details and advance ticket purchase. The film will be shown at Dragon Con, free-of-charge,  on Blu-ray Disc.)

800 people attended the tour’s San Francisco premier in April, 2013, followed by 13 straight sold-out June shows in Austin, Houston, San Antonio, Kansas City, Denver, and Fort Collins, plus another sold-out screening in August at the American Film Institute theater in Silver Springs, Maryland. The film now comes to Dragon Con after screenings across Southern California. At the show for the University of Southern California (USC), more than 400 RSVPs were requested for only 200 available seats, once again underscoring the continued popularity and fan reverence for The Last Unicorn.

Be sure to arrive early to see this classic film at its Dragon Con showing.