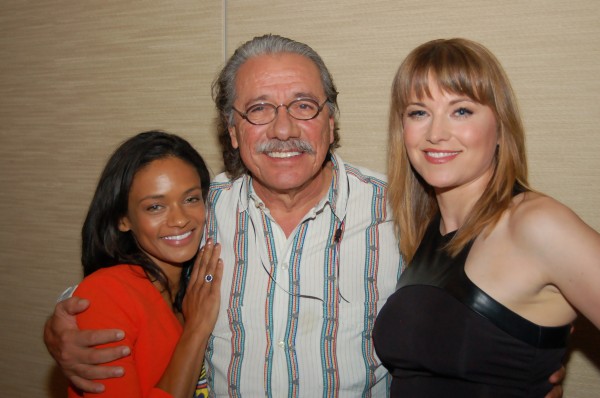 This year marks Lucy Lawless’s first time at Dragon Con. On the panel, she spoke about her initial actions when she joined the show for the eighth episode of the second season. There seemed to be an undercurrent of distrust for her among the regulars on the show. She reacted by joking and ribbing them. “It’s not a good idea,” said Lawless, “to razz nervous people because then they really hate you.” Of course, soon after, she fit right in. Later during the panel, Lawless had an epiphany that perhaps Ronald D. Moore and David Eick had orchestrated her introduction with the cast as an outsider not to be trusted since that was essentially the role her character played on the show. The other cast members agreed that the thought had plausible substance.

When asked about her many genre roles, Lawless said, “Xena was the most fun. Lucretia [from Spartacus: War of the Damned] was the most emotionally demanding.”

Right from the start, Edward James Olmos told a long and heartfelt story about his search for music that would inspire him and set the tone when they began shooting the show. He dug through a small music store and discovered a Deva Premal CD. Premal mixes ancient Sanskrit mantras with contemporary music. “I played the music on the set for costume changes, rehearsals, and photo sessions,” said Olmos, trying to lay the foundation for everyone working to bring this new version of Galactica to life.  Later in the panel, he insisted that he was “so proud and so grateful to [have been] a part of the show.”

When asked how much warning Kandyse McClure had before her character was killed off on the show, she said, “Four or five days.” At the start of one day on the set, the hair and makeup guy said, “So sorry.” When she wasn’t sure what he was referring to, he passed her his production script and said, “You should read this.”

McClure also spoke about strong female characters on Galactica and on television in general. “Sorry guys,” she said. “You’ve had [the power] for 5,000 years. Now we’re going to take over.” She also insisted that more women need to write and direct to make and facilitate better roles for women. Olmos added that the same was true for roles for “people of color and ethnicity.”

Overall, the enthusiastic audience asked plenty of questions, and the panel, like so many for Battlestar Galactica, ended with a boisterous and heartfelt, “So say we all!”