At the “Star Trek: Deep Space Nine” panel that took place on Friday at 2:30 in the Sheraton Grand Ballroom, show stars Avery Brooks, Cirroc Lofton, and Terry Farrell (with moderator Garrett Wang) took questions from the audience and reminisced about their time on set. This year marks the 20th anniversary of the show’s premiere.

Wang dove right into audience questions, and the first addressed the great on-screen relationship between Ben and Jake Sisko (Brooks and Lofton) and how much their time together off-screen impacted it. Lofton said that the majority of the relationship was off-screen. The two of them spent a great deal of time together both on the set and off–Brooks took Lofton to his first basketball game and they traveled the world together promoting the show. That strong bond came through in their performances. Even then, what viewers saw on camera was only “the residual of what we really feel for each other” according to Lofton. Brooks added: “You can’t write love.” 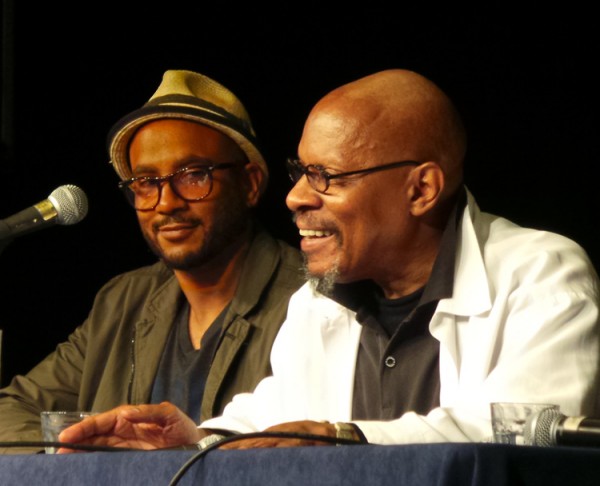 Deep Space Nine was a left turn for Star Trek (in the words of executive producer Ira Steven Behr) in terms of tone. The show “looked more like we looked” and was about “those things we that we are inextricably connected to.”

Terry Farrell echoed this when talking about one of her favorite episodes, “Rejoined” (also directed by Brooks). This was Star Trek’s second attempt at addressing LGBT issues after the Next Generation episode “The Outcast.” “We tried to do our best to tell the story in a way that would make people hear us,” she said, citing that it was an important story for people she cared about and one that she felt Gene Roddenberry would have been proud of.

Farrell also had great things to say about the makeup artist who created her character’s look, Michael Westmore. At first, Dax’s makeup matched that of the Trill first seen on Star Trek: The Next Generation, but this didn’t last very long since the design didn’t look that great (“It looked like I got hit in the head”). Instead, Westmore went with the design he created for a different TNG character, Kamala in “The Perfect Mate.” He hand-painted the spots on each day.

The only time Brooks had to wear extensive makeup was in the episode “Apocalypse Rising” where Sisko had to disguise himself as a Klingon. This wasn’t a popular move with the character or the actor who played him. “The anger and the resistance that you observed [from Sisko] to playing a Klingon were real!”

One audience member gave a moving testimonial to what watching Deep Space Nine meant to him as a black kid watching science fiction television in the 90s and how Brooks in particular was and is an inspiration to him. Judging from the long applause he received, he was not alone in feeling this way. Brooks has said often that this was one of his goals in taking the role of Sisko. “One of the principle reasons I wanted to do this is because we would be able to see ourselves in some 400 years as whole and human and, in this case, black.”

For those who missed this panel, you’ll have two other chances to see Brooks, Farrell, and Lofton together this weekend. They’ll be on the panel “Deep Space Nine Guests” on Saturday in the Sheraton Grand Ballroom at 7PM and “Deep Space Nine (2)” on Monday at 11:30AM in the same location.