Two of the Grimm stars, Claire Coffee and Silas Weir Mitchell, joined fans for a rollicking Q&A on Friday at 5:30PM in the Marriott Imperial Ballroom. The first questioner wanted to know how the actors got the roles of Hexenbiest Adalind Schade and Blutbad Monroe. Coffee responded, “Ever heard of a casting couch?” When the laughter died down, Mitchell said he had previously worked with Grimm producer Jim Kouf, who invited him to audition. 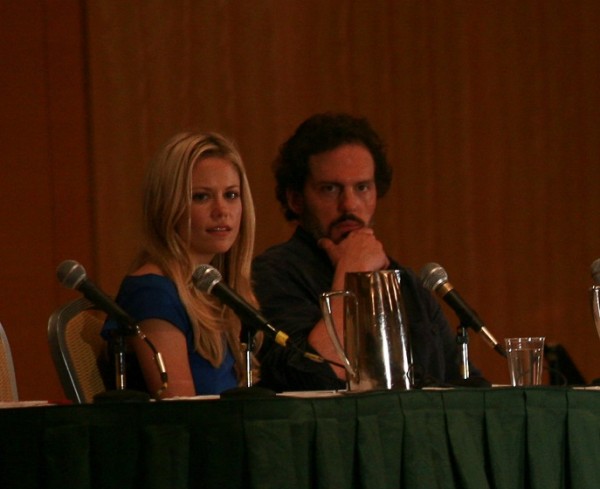 Coffee said she auditioned on tape. Because there were no lines for her character in the pilot, she performed a specially created scene in which Adalind asked a police officer for information and then ate his head. Mitchell asked her what she did for the head-eating action, and she replied, “I just gave my best smirk.” Mitchell suggested that the threat of violence is always more interesting than violence itself.

When asked how long the transformation makeup takes, Coffee replied that all the morphing scenes are CGI, except that her stunt double was in full makeup—which took hours to put on and remove—for the fight in the forest with David Giuntoli’s character, Nick Burkhardt. Mitchell said he had worn the “full latex rig” only once, to perform a number of different actions in front of a green screen for use in future episodes. In the end, the producers opted for CGI instead. Guests and stunt doubles, however, do have the full makeup because they have more time for it to be applied and removed than the series regulars do.

One attendee asked Mitchell if he was fluent in other languages. Mitchell replied in Italian and French. He confessed that he doesn’t speak German, which is often used in the show, but is learning it through Rosetta Stone. 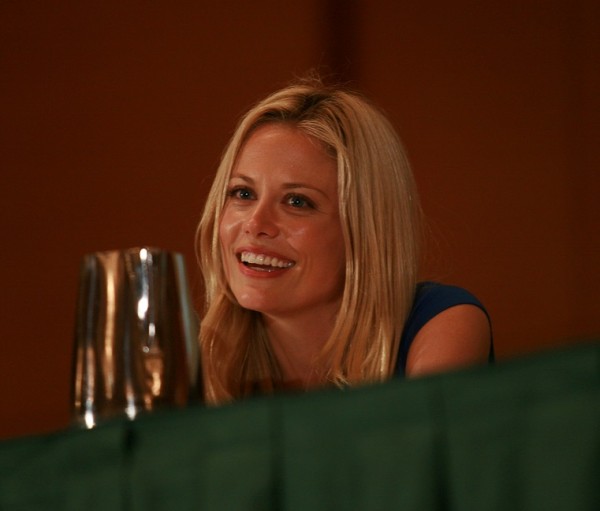 Another audience member wanted to know whether there was a translator on the set. Coffee said she had just done a full scene in German. Mary McDonald-Lewis, who plays Frau Pech, is a dialog coach and helped the show connect with a translator.

In response to a question about how much the actors have in common with their characters, Coffee said she finds playing a villain helpful because she exorcises her deep, dark urges at work and then can “come home and be nice.” Coffee added that she and Adalind are both driven and joked that, aside from their wardrobes, they are “peas in a pod.” Mitchell responded that he and Monroe both have an “obnoxiously good sense of smell.”

Noting that Mitchell has played “a lot of crazy characters” and Monroe seems to have rage bubbling up in quite a few scenes, one questioner asked whether Mitchell ever wanted to unleash his fury. Mitchell replied, “In an early episode this season, Monroe gets off the chain.” The answer drew cheers from the audience. 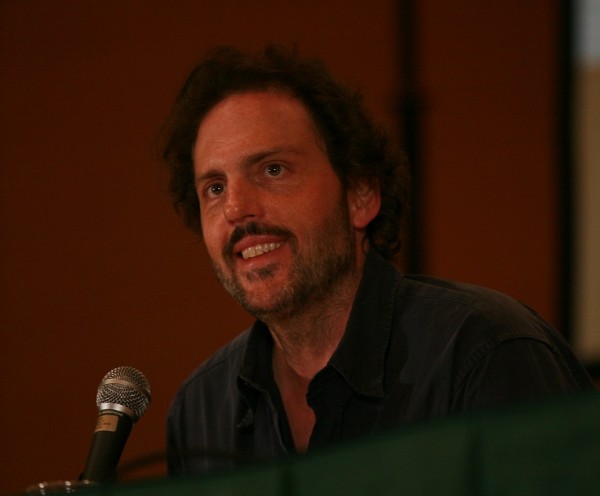 One attendee wanted to know whether Monroe is the character’s first or last name. Smiling, Mitchell said, “Can’t it be both? It’s just Monroe. Like Cher.”

Another audience member asked whether a child of Rosalee and Monroe would be a Wesen or a Fuchsbau. Mitchell replied, “That is a question I promise you will be answered.” Someone else asked whether that baby might be a litter. The actors joked about the question, with Mitchell agreeing, “It’s a legitimate thought that’s out there in the world.”

Asked whether the legends and mythology on the show freak the actors out, Coffee said, “I’m afraid of everything.” She explained that she’s more afraid of a ghost coming in to rape her in her sleep than she is of a person climbing through the window. Mitchell said he isn’t afraid of anything on the show but does fear the human psyche and what’s in it.

Responding to a question about their favorite television shows, Coffee listed Doctor Who and Orphan Black on BBC America. She enjoys Orphan Black because the lead actor plays multiple clones of herself. Mitchell cited Battlestar Galactica, which he’d only recently discovered, and Game of Thrones.

An attendee asked the actors how they think the characters on Grimm differ from those on other science fiction or fantasy shows. Coffee and Mitchell praised their cast mates and the writers, noting that the characters have more depth than in some television shows. Mitchell said the producers cast “cool, interesting people” and ended up “creating a group who are humans before they’re actors.”

When asked why clockmaking was chosen as Monroe’s hobby, Mitchell theorized that it requires a lot of patience, focus, and calm—behaviors in opposition to the rabid, morbid inner rage Monroe might display if he were not a vegan. Mitchell feels having that kind of focus helps keep the Blutbad in the cage.

One audience member asked the actors if they were enjoying Dragon Con and would recommend it to their other colleagues. Noting that shooting schedules affected some of the cast’s ability to travel, Mitchell promised, “We’ll be back because you guys are awesome.” Everyone cheered.

The actors offered carefully chosen teasers for the upcoming season. Coffee said Adalind’s meanness “will get worse before it gets better.” She also said the show would be doing “alligators in sewers.” Mitchell added that there will be creatures based on entombed animal guardians from Egyptian mythology.

As the panel concluded, X-Track director Leigh Bennett-Conner announced that Grimm now has a comic book. She gave a copy signed by the panelists to an audience member chosen at random. The program ended with a standing ovation.