The “SG-1 Reunion” panel in the Westin’s Peachtree Ballroom on Saturday at 5:30PM featured series regulars Richard Dean Anderson, Christopher Judge, and Teryl Rothery alongside frequent guest actors Alex Zahara and Dan Payne. The program kicked off with the moderator asking the guests how they were enjoying the con. Judge responded that there seemed to be “not as much nudity as usual, if anyone would like to rectify that.” Although no one did, the audience did laugh. 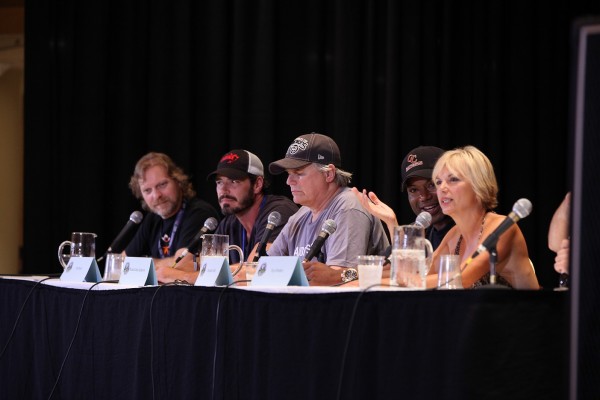 The moderator moved on to ask the cast members for any stories about people behind the scenes in the show. Zahara talked about being in a van heading to a location shoot in full alien costume for the episode “Beast of Burden” when they had to go through a police roadblock. The officer blandly waving people through looked into the van and clapped a hand to his sidearm. “You just saw the fear in his eyes,” Zahara said.

Payne described his gratitude to a female studio aide who assisted him when he was in full-body latex alien makeup, complete with long, spiky fingernails. Unfortunately, the suit design did not allow for solo bathroom visits. The aide had to assist him with the entire process. When he told her what he needed, he started by saying, “First, I want to say sorry, and I owe you diner” before explaining the problem. Afterward, as the audience laughed, he said, “I hugged her and cried a little. She cried a lot.”

At that point, Anderson and Rothery, who had been delayed by crowd congestion, arrived. Rothery addressed the “behind the scenes” theme by noting that the cast really was like a family, complete with days when they didn’t get along as well. Describing Judge as “not a morning person,” she said that while they were both in makeup early one morning, she was chatting and Judge wasn’t responding. On that particular day, she found this very annoying and threatened not to talk to him for the rest of the day. As he began to wake up and talk, she refused to respond, but Judge eventually had enough. They were both in makeup for touchups when he duct-taped her to the chair. Rothery laughed so hard that she cried, ruining her makeup, and they were both already late to the set. Eventually, Judge said, “There. That’s the last time you’re gonna ignore me.”

Anderson discussed the now-famous, ongoing fart contest he and Christopher Judge waged during the series. Judge indicated that he had the first inkling of this future development when he was a guest on MacGyver. Citing Judge’s diet, Anderson smilingly said, “I handed him the crown.” Judge responded, “Rick is being modest,” describing Anderson as his idol and the man who “taught me everything I know about farting.”

Moving on, the panel took questions from the audience. The first questioner asked the actors which were their favorite episodes. Anderson replied that the most fun episode to act in was “Brief Candle.” In that episode, O’Neil slowly ages to be 100 years old. Anderson had never before worn extensive prosthetics, which took four hours to put on and two and a half hours to remove.

Another audience member asked the actors whether they would’ve liked to change anything about their characters. “Yes,” Rothery replied. “I wouldn’t have been killed off.” Over thunderous applause, Anderson asked her, “Did you plant that?”

Payne, who appeared in 13 episodes, said he would have had his actual face show more often. Zahara, referring to his appearance as the alien leader who took over Stargate Command in “Foothold,” said he would have stayed in charge of the base. Judge closed out the question by stating, “Teal’c would wear more codpieces,” which drew a roar of laughter.

Responding to a question about improvisation on the set, the cast teased Anderson about his tendency to ad-lib. Judge said, “For Rick, the script was kind of just a suggestion.” As the audience laughed, Rothery added that she never knew what Anderson would say, except that it wouldn’t be the line as written. She described waiting for her cue, only to have him stop, pause, and then ask, “You gonna say something?”

Anderson admitted, “I took a little license with the script,” and noted that he had talked to the writers about his desire to, “tweak things a little.” The producers assured him they would let him know if it was a problem, and he indicated that he appreciated the freedom he had. Zahara added that he was allowed to change a line for his hippie character, Michael, in “1969.” The character kept saying he didn’t want to go to war. Zahara wanted the character to say instead that he didn’t want to kill people. Being allowed to make that change opened up the character for him, and he enjoyed the fact that, “they let you create.”

Asked how playing O’Neil felt after Kurt Russell had created the character, Anderson replied that he knew he couldn’t portray someone as stoic as Russell’s portrayal for two years or even longer. He and the producers discussed the character, and they agreed that a “lighter edge might be warranted.”

Judged chimed in, “Rick is being too modest. He set the tone of everything.” The cast laughed and joked so much, Judge explained, “because of the lead of this guy. That was why it was fun.”

An audience member said he’d always wanted to hear Judge say “indeed” in person and asked the actor if he would. Grinning, Judge leaned into the microphone and said in perfect Teal’c tones, “Indeed.” Over the applause, Anderson said, “That was good,” and Judge remained in character to say, “Thank you, O’Neil” as the attendees laughed and clapped.

The last questioner asked the panelists to describe their feelings when Stargate: SG-1 ended after 10 seasons. Rothery responded, “I only died.” Over loud “awww” sounds from the audience, she cheerfully said, “I know. I’m gonna milk it.” Judge described the ending as “bittersweet,” noting that he was ready to, “be someone else” but hated not being with the cast and production team anymore. Anderson then chimed in, “Indeed.”

Payne said that from the perspective of someone who dropped in from time to time, it was great to have a family environment like the one on Stargate SG-1. Zahara added that the show, “took good care of us.”