John Barrowman returned to Dragon Con this year to reunite with his Torchwood cast mates. But before he took the stage with the crew, he did a solo panel called “John Barrowman Live!” on Friday at 11:30AM in the Marriott Atrium Ballroom. John’s panel antics are legendary–at a previous Dragon Con he pulled down his pants and spanked himself—so, expectations were high.

Mr. Barrowman did not disappoint. He bantered with and teased the audience members who asked questions, ramping the sass up to 11 throughout the hour. His sister Carole E. Barrowman sat in the front row and kept her younger brother in check. After an early crack about her age, every time John forgot something and had to ask the audience for help, she stood up and cried out, “Now who’s menopausal!” while the fans cheered her on.

Barrowman revealed that his favorite Doctor is David Tennant. He added that he doesn’t know anything about the direction Doctor Who is taking but would love to reprise his role as Captain Jack Harkness. He also talked about the Torchwood novel he co-wrote with Carole, Exodus Code. Though it might be assumed that the siblings just wrote the book on a lark and had carte blanche because of John’s involvement with the show, he revealed that they had to go through the same approval processes as any media tie-in writer. However, the BBC gave them a lot of freedom.

Questions ranged from musical theater to possible Torchwood reboots to his return to Arrow (yes, it’s happening!). However, one theme kept coming back around: being gay, being out, and being in a high-profile gay marriage as well as how it has impacted Barrowman’s career and affected and inspired fans. He and his partner Scott Gill have been together for 20 years. They entered a UK domestic partnership in 2006, but in July of this year they legally married in California as well. They did this in part to back up and support those still struggling for marriage equality here in America and in other parts of the world.

John said that he never set out to be an example, but at the same time he made a conscious decision early on not to hide his sexual orientation, despite being told it could be detrimental to his career. After telling this story, he gestured to the room and said, “If this is detrimental? Bring it on!”

The audience did get a glimpse of John’s underwear when he asked an audience member to cut an annoying tag off of his briefs. 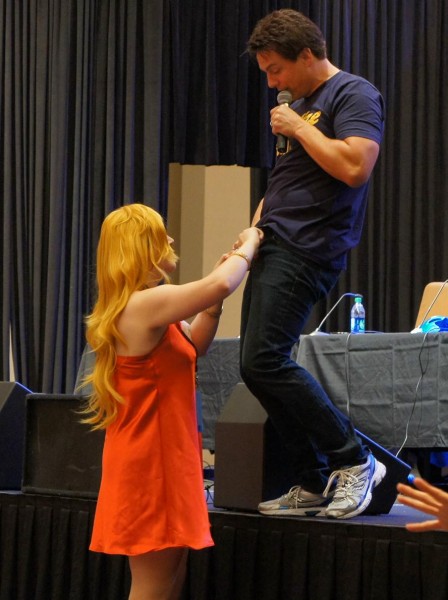 Sadly, the full monte did not happen. Barrowman begged off, claiming that he had no new superhero underwear to show off. The audience was forgiving, especially since he capped off the panel by making out with his husband while they wore Captain America and Wolverine masks.