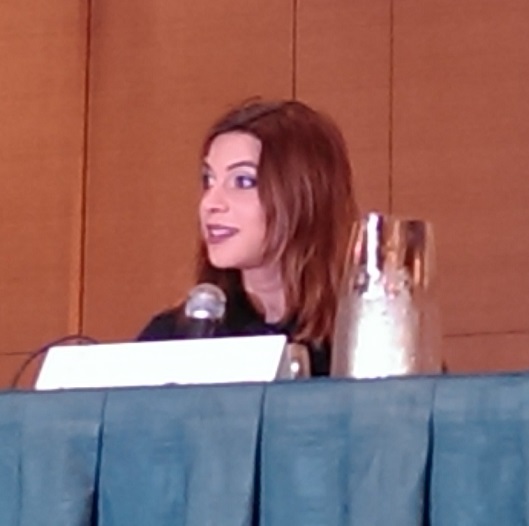 Natalia Tena brought the character of Tonks from the page to the screen. In “An Hour with Tonks” Saturday at 2:30PM in the Marriott Imperial Ballroom, Tena talked all things Harry Potter and what it is like to be a part of something that is such a big part of so many people’s lives.

Tena’s first Harry Potter memory is getting to the set and going through her costume fitting and having her face and behind molded in plaster for some prosthetics needed for filming. Another fond memory was meeting J.K. Rowling, hugging her, and saying thank you on the set. When asked to pick her favorite HP movie and book, she said the fifth book, Order of the Phoenix, because that is the first one she read, and the first movie she was in.

Almost everyone has wondered what Hogwarts house they would be sorted into. For Tena, it depends on what time of the month it is. If she had been in Lupin’s Defense Against the Dark Arts class, her boggart would be a giant wasp. Tena would have fit right in with Hagrid’s class since the Monster Book of Monsters is her favorite Rowling creature.

Most days Tena carries on without thinking about how Tonks has impacted the lives of so many people, but when she attends conventions, she is reminded. However, every single day she is shocked and awed by where her career has taken her.