Peter S. Beagle, author of The Last Unicorn and screenwriter of the famous film adaptation, provided running commentary for the Dragon Con screening of the animated feature at the Young Adult Literature (YA) track on Saturday at 5:30PM, International North, Hyatt. Moderator Jana Lott introduced Beagle as “one of the greatest living fantasists.”

Beagle finished The Last Unicorn in 1967. The book was published the next year, and the film was released in 1982. 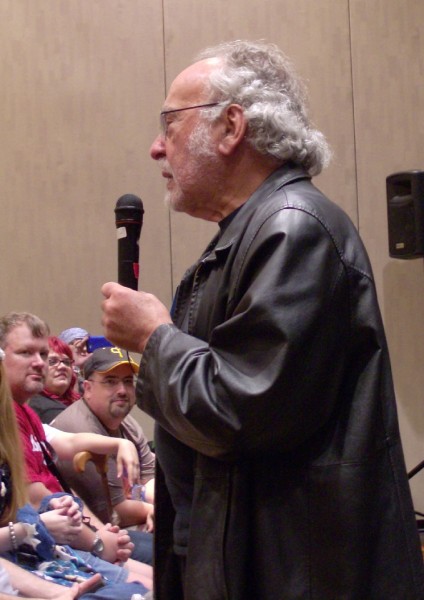 He spoke of his “absolute amazement that the thing can still pack a hall” and told anecdotes about the characters and the actors playing them, including Angela Lansbury as Mommy Fortuna, Christopher Lee as King Hagard, Jeff Bridges as Prince Lir, and Rene Auberjonois as The Skull.

Almost fifty years after it was first released, Beagle’s story still appeals to devotees of all ages.  The prospect of viewing the film at Dragon Con caused young fan Aisling, five years old, to exclaim, “I love The Last Unicorn. This is my favorite movie.” Her older sister, nine-year-old Alannah agreed. “It’s really cool.”

When magician Schmendrick transforms the unicorn, he justifies his action by saying, “Magic chose the shape, not I.”   This classic film can make the same claim, but the magic is all Beagle’s.