The Dragon Con Parade is about people coming together and sharing a love for all things geeky. Whether it is Science Fiction, Fantasy, or Science, there is something for everyone. The parade offers the opportunity to showcase yourself and your passions.

One of the groups in the parade is the Periodic Table. Jennie Law is the director. Although she is not a science teacher or works in the science field, it gave her an outlet to show off her love of science. This opened the door for others. 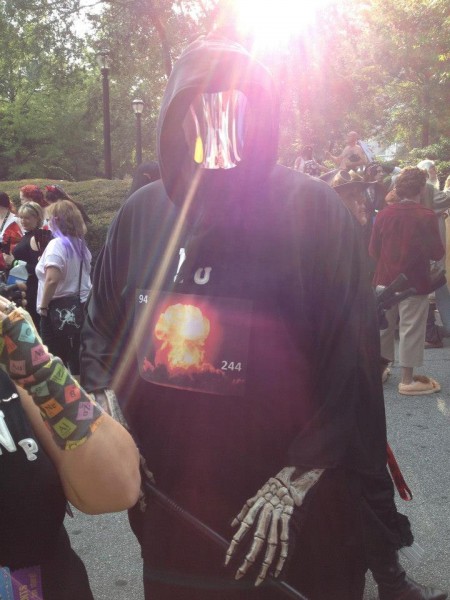 One of the participants, Kenny Litfin, has participated for the past three years. He represents Plutonium, which is ironic in the fact he was a nuclear engineer. For the past two years, his “costume” was a T-shirt with a picture of plutonium on it and shorts. This year was different. He wanted to do something a little more elaborate to enwrap himself in the parade. The Grim Reaper came to mind.

In working on this costume, he purchased the outer garment with hood. More research unveiled the discovery of the gloves and mask. The mask is mirrored, so that the person looking at him sees his own reflection. The final touch was his sickle. He added the element to his costume and he was ready to walk.

As a participant, Kenny had to keep in mind that this event is outdoors. Although the material was thin, the mask/hood created a tunnel-vision effect and it was black. By the time he reached the end of the route, he was soaking wet. It was a great thing that the local Boy Scouts were there handing out bottled water.

Would he wear it again? Absolutely. It’s part of the fun of being in the parade.