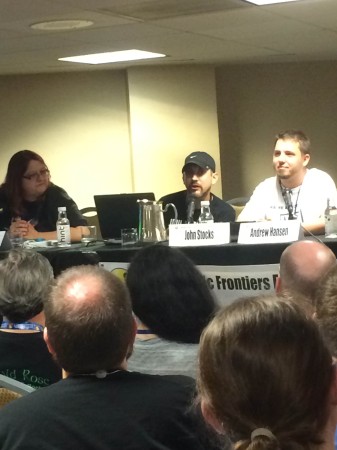 In less than two years, the augmented massively multiplayer reality game, Ingress, has captured the attention and imagination of hundreds of thousands of people worldwide. Elonka Dunin, John Stocks, and Andrew Hansen described the game and answered audience questions during the Ingress panel on Friday at 7PM (Hilton).

Originally an Android game, a version for iPhones was released a little more than a month ago, and apparently the number of players (also called “agents” in-game), has swelled, possibly doubling, since then, according to Stocks. The popularity of the game was evidenced by the fact that the room in which the panel was held was full to overflowing. Scott Jones, the director of the electronic frontiers forums at Dragon Con, told this reporter that he counted around 135 attendees, more than the room’s capacity.

The basic premise, as described collaboratively by all three panelists, is that a new form of matter, called Exotic Matter or XM for short, was introduced to our world by beings known only as “the Shapers,” which no one has seen or can describe. The purpose of XM is unknown, but two factions have developed, each of whom believe they understand the purpose of this material. Those in the Enlightened faction (identified in-game with green colors) believe that XM will help humanity evolve into a higher or better state, while those in the Resistance (identified as blue) are afraid that XM will be used to control and enslave humans.

The audience seemed pretty evenly divided between the two factions. The panelists were also evenly divided, even though there were only three of them. Stocks is Enlightened, Hansen is Resistance, and Dunin’s primary ID is Enlightened, while she also has a secret profile that is Resistance, a special allowance made only to a select few of the developers and testers by Niantic Labs, the division of Google that developed the game.

The game encourages people to get out of their houses and wander their city or town. It is a GPS-dependent game and the bits of new exotic matter are being released into our world through portals that are attached to real-world sites of interest, like pieces of urban art, historical buildings, unique stores, and many other places. You can only detect these “portals” by using the game app on your smart phone. The game also encourages socialization, since many of the objectives are made easier through teamwork.

The audience was filled with enthusiastic players, many of whom have been playing since the game was released or soon after. People enjoy the game for a variety of reasons. When this writer asked some random audience members what they enjoyed most about playing Ingress, the answers included:

“Messing with my opponents” – Veetid from Columbia, SC (Enlightened)
“Walking, exercise” – sirpugglesworth (Resistance)
“Seeing sights you wouldn’t normally see in your area” – GTFireball (Resistance)
“It helps with my interval training” – integritas (Resistance)
“Getting off my butt and out the door, makes my morning commute actually exciting” – Datan0de (Enlightened)

Whatever the reason for play or the side you choose, Ingress seems to be massively popular and a great way to make new friends. “I have the most fun with the people I meet in this game. In the first 3 months of playing, I met more people than I’d met in the eight years I’d lived here,” said Stocks. Hansen agreed, saying, “In any given city, I can meet up with someone and have a beer within an hour of arriving.” He’s had several people offer to walk around and chat for a while.

However, Dunin remarked that cities are different, some places are friendlier than others. She said that in some places people even do things like take pictures of your license plate and send it along to the rest of their local faction. No matter how into the game you are, all the panelists strongly encouraged people to stay aware of their surroundings. There have been auto accidents related to drivers playing while driving.

Ultimately, though, the panelists reminded the audience that this is just a game, and that like all games, it will end eventually. But apparently, there are some exciting new things in the works, both for Ingress, and involving some new games. This type of game is gaining so much popularity that the phenomenon is bound to continue and evolve.

Inara de Luna is a writer, editor, desktop publisher, and SF/F fan. She has been published in a variety of genres and venues and has edited dozens of books, articles, and essays. She is currently a monthly contributor to LGBTRelationshipNetwork.org. Inara is also a Relationship Coach and Sexuality Educator who works with people around the country via phone and video. As a Sex, Gender,  & Relationship Diversity Specialist, Inara specializes in offering her services to those who identify as poly, queer, trans, and/or kinky. Inara can be found online at The Sex Positive Coach (https://www.sex-positive-coach), on Facebook at https://www.facebook.com/inaradeluna and on Twitter as @inaradeluna. And yes, her chosen name was inspired by the beautiful courtesan on Firefly.  :)