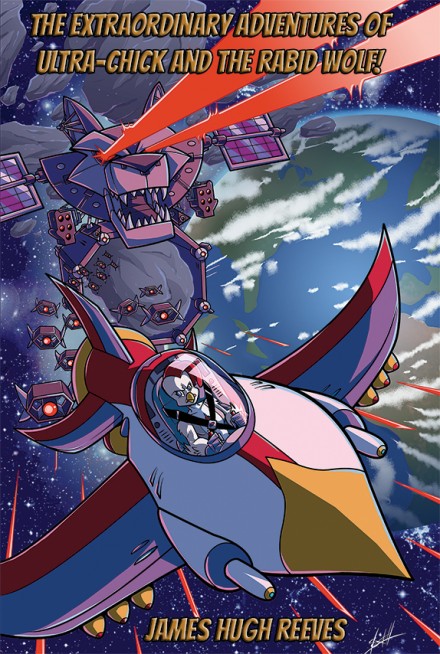 James Hugh Reeves is an exciting new author on the scene with the Gilded Dragonfly. In celebration of his success, there was a launch party in Embassy D-F (H) Thursday at 7PM.

His new fantasy book, The Extraordinary Adventures of Ultra-Chick and the Rabid Wolf! comes out this week. This middle-school reader centers on Ultra Chick, the unlikely heroine that has to instill peace between the factions of humans and animals. Since the event occurred that caused a number of the world’s animal population to evolve at an incredible rate, many of the animals who underwent the change have done extraordinary things. Some dedicated their lives to doing good for both animals and humans, while others chose the path of evil.

In this time of fear and confusion Ultra-Chick has taken on the mantle of hero to protect the good and defend against evil.  In her secret underground Center Of Operations, or COOP, she uses her powers of perception along with her super computer to scan the world in search of those who would do harm to either animal or humankind and puts a stop to their devious plans.

According to the author, “Born in a chicken coop in the Georgia foothills and raised by Henny Penny until he was old enough to cross the road, James Hugh Reeves has spent most of his life contemplating which came first, the chicken or the egg. Then one day James realized that the sky was falling so he’d better shake a tail feather because he was no longer a spring chicken. So on a wing and a prayer, he flew the coop and jumped in feet-n-feathers to put out some chicken scratch for all to enjoy; and now he has something to crow about! Now, James spends his time (when he is not writing) embarking on various daily adventures with his real life Ultra-Chicks: wife Rachel and two girls, Bella and Maddy.  James loves reading (especially Sci-Fi and Fantasy), movies, swimming, and really pretty much anything that involves being in the outdoors” (https://www.adventuresofultrachick.com).

Even though the book had not been released as of the party, James brought full-color posters of the cover (which he designed) and happily gave autographs. I know this reporter is excited for this new author and can’t wait to get the book.