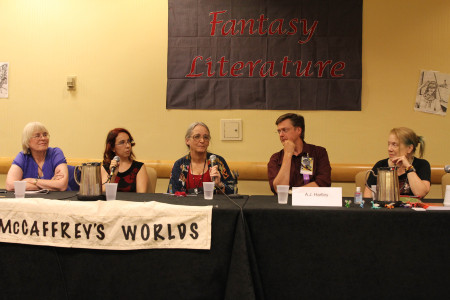 The session opened on a cheerful note when Moore asked the three Temeraire aviator cosplayers in the audience to stand. Everyone in the packed room applauded. As the panelists introduced themselves, they said a little about why they were on the panel and what drew them to history.

Hinds has written 51 nonfiction books for young adults, primarily social history. She enjoys the medieval, ancient, and early modern periods, and she teaches composition and early British literature at the University of North Georgia . This fall, she’ll publish her first fantasy novel, The Healer’s Choice, which was inspired by the Roman conflict with the Germanic tribes.

Hartley has written a dozen novels, including mysteries, thrillers, fantasy, middle grade, and young adult works. He also is the Russell Robinson Distinguished Professor of Shakespeare Studies at The University of North Carolina at Charlotte. Moon’s first degree was in history and she is most drawn to the ancient and medieval periods, which influenced her science fiction as well as her fantasy works.

Novik labeled her Temeraire series as “the Napoleonic Wars with dragons” and said the eighth book has just come out in a mass-market paperback edition. She has another book, Uprooted, due out in June 2015. Set in Renaissance Poland, it was inspired by the Polish fairy tales her mother read to her when she was a child. She said she takes both inspiration and constraints from history and loves to “get lost in Wikipedia for hours on end.”

Kurtz described herself as the first modern fantasy author after Tolkien, noting that she wrote in trilogies because, based on what he had done, she thought that was expected. She said she is best known for the Deryni series, with the third volume of the Childe Morgan trilogy that takes Alaric Morgan through the age of 15 and the birth of Kelson Haldane, due out in December.

When asked what they loved about history, the panelists cited different factors. Moon said, “What could be more exciting?” Quoting the saying that those who don’t learn from history are condemned to repeat it, she went on to say that she especially likes crypto-history, the secret history behind the written history that has generally been written by the winners.  She noted that research can become so absorbing that people don’t actually write their stories but added that she loves to find tidbits that spark “aha” moments.

Novik said that writing in a particular period gives a sense of place and depth, grounds the story, and forces the writer to meet the same inconveniences the characters would meet. She likened studying historical periods to exploring alien or fantasy worlds, noting that writing in other eras involves worldbuilding much like fantasy.

Moon said she had read historical fiction and history when she was growing up but did not attempt to write about a historical period for a long time, possibly because she read mostly contemporary fiction in school. She had great history teachers later in school and as a student at Rice University. Her college classes exposed her to economic and social history, and she enjoyed the various periods in Cecelia Holland’s novels. Moon added that she set her books in periods of particular interest to her.

When the moderator asked Hartley what drew him to Shakespeare, Hartley began by saying that he doesn’t believe in universalisms or in the theory that Shakespeare transcends time and place. To understand Shakespeare, he added, one must understand the context of the plays—the economic conditions and the events of the period when they were written. He described the study of history as “the pursuit of what’s just out of our reach,” noting that the more one reads about an era, the more problematic primary research becomes. As an example, he cited the first-person accounts of the death of a religious martyr, noting the many discrepancies among them. The more one reads, he said, the more one realizes how much it’s impossible to truly know.

Hinds attributed her love of history in part to excellent social studies teachers in high school. Her teachers allowed the students to study different themes in each era. Hinds enjoyed the biographic approach of one period and the myths and legends of another. One of her best classes focused on the women’s movement, which drew her to the history of the late nineteenth century. She likes the stories of history, especially motives and repercussions.

Hinds cited Catherine Morland from Jane Austen’s Northanger Abbey who said she didn’t read history because there were no women, it was full of war, and the men were good for nothing, adding that she (Hinds) likes to know what women were doing and how people lived.

Picking up on Hinds’s comment, Hartley cited a saying from L. P. Hartley’s The Go-Between, “The past is a foreign country. They do things differently there.”

Novik pointed out that we eat foods that did not exist in prior eras. Kurtz noted that we still handle trash largely the same way, by putting it in piles. What would people find if they went through our trash 300 years from now? Two hundred years ago, she added, there was no mass production. Everything was hand-made, from the threads in fabric to the woven cloth to the garments people wore.

Hinds cited Elizabeth Wayland Barber’s Women’s Work: The First 20,000 Years—Women, Cloth, and Society in Early Times as showing the importance of women to families and the economy because they were the ones who spun the thread, wove the cloth, and made the garments. The spinning wheel, she said, was not invented until the 1300s. Before that, spinning was more labor intensive but more flexible because the distaff and spindle were portable.

Moore asked the panelists where they started with their research. Moon said she reads a great deal of nonfiction, citing Barbara Tuchman, books on daily life, and translations of legal codes. She mentioned Project Guttenberg as a source.  Novik said she first tries to get an impression of the mood of an era and a sense of its people, recommending primary sources as a way to find a voice for a character. Hinds also expressed a liking for primary sources, citing Herodotus and Tacitus as favorites.

The panelists extensively discussed the persistence of fantasy settings that harken back to medieval or Renaissance England. Moon pointed out that there have been works with other settings, but they were regarded as outside the mainstream. Hinds noted that the flowering of romantic fiction in France and Britain spread across Europe, even to countries with different cultural traditions.

Hartley suggested that Britain may be particularly popular because of writers on both side of the Atlantic feeling that they have a common heritage and expressing a longing for a past that never really existed. Novik added that there is a tendency to see the past as less advanced than it truly was, citing a YouTube video of a man putting on medieval armor and rolling around in it, demonstrating that it was not as clunky and unwieldy as modern perceptions would have it.

Moon said that change is always happening and that the times will sometimes force people to make different choices. Hinds expressed a fondness for little moments that demonstrate a change. As an example, she cited a letter from the Venetian ambassador in Turkey about a Turkish beverage that helped people stay awake—coffee.

The panel illustrated interesting connections among history, fantasy, and the need for worldbuilding.