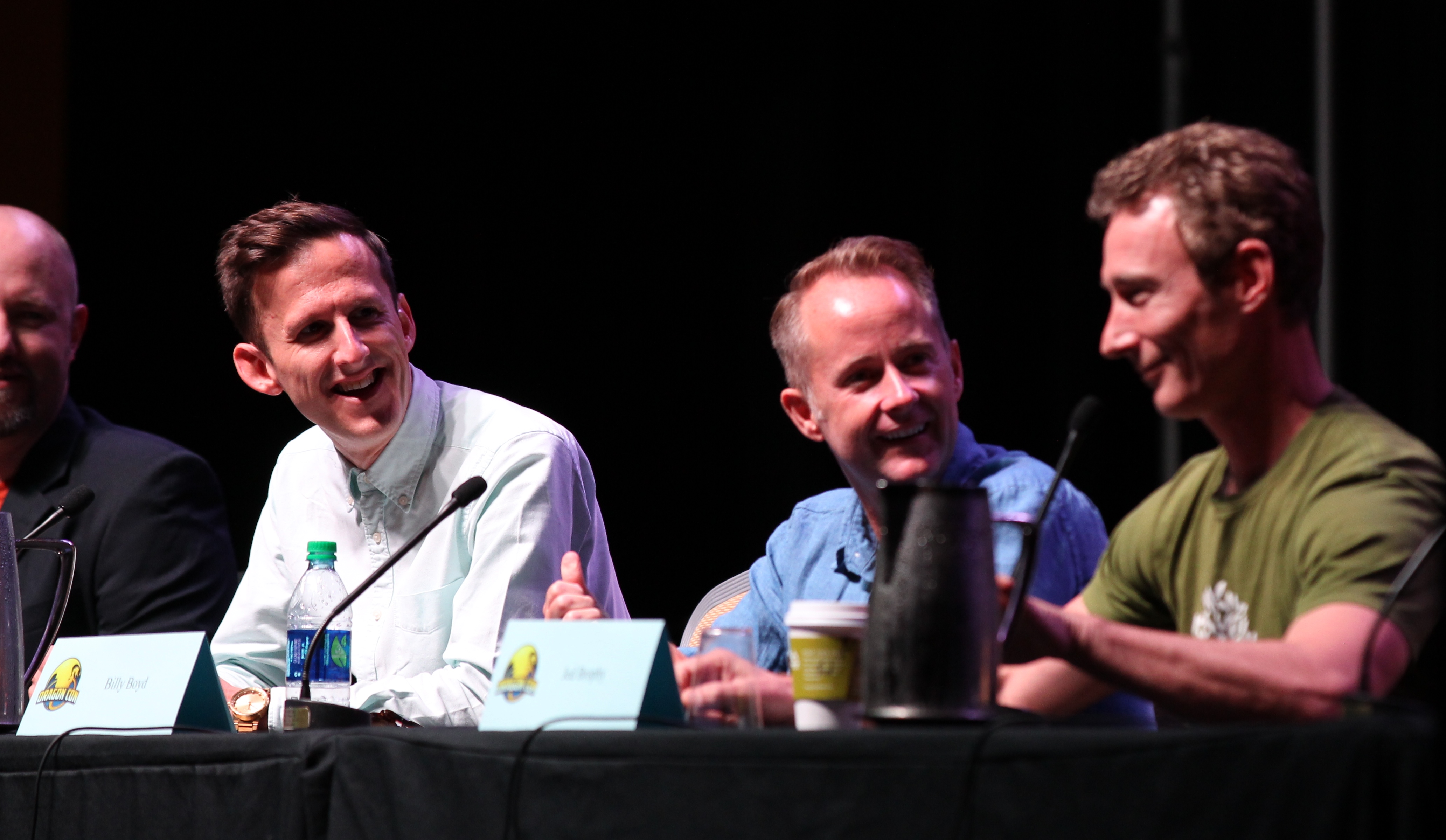 Both the “Guests of Middle Earth” panel (Friday 11:30AM in the Marriott) and the “Tolkein Guests” panel (Saturday 11:30AM in the Marriott) started with the trailer for The Hobbit: The Battle of Five Armies, featuring Billy Boyd’s song “Home is Behind” from The Lord of the Rings: Return of the King. The audience cheered as the trailer ended and moderator Larry Curtis kept the enthusiasm going as he introduced the panelists. Friday’s panel included Boyd, Adam Brown, and Jed Brophy. They were joined on Saturday by Craig Parker.

The camaraderie among the guests was obvious as they joked and bantered with each other throughout. Since a lot of the work Brophy has done with Peter Jackson has been physical acting, Curtis made sure to prod the audience into asking questions that would get Brophy out of his chair. During the panels, Brophy demonstrated what goes into getting the dwarf walk just right. It starts out with walking like you have a cannon ball in your stomach and then plowing the earth behind you as you walk. The elf walk is very different because they walk very erect and high up and a dwarf is much more connected to the ground. Brophy also demonstrated how a dwarf runs and how an orc walks.

The discussion of movement stemmed from a question about how costumes helped each actor’s performance. Brophy played one of the Black Riders in The Lord of the Rings: Fellowship of the Ring. The costume had several layers of cloth that billowed menacingly as the horses galloped. They filmed those scenes over six weeks in the summer, which was hot and uncomfortable but the costumes looked amazing. For Boyd, it was finding the scarf for Pippin that was the key to the character. Boyd said, to Pippin, the scarf is the Shire. Brown said for him it was finding the right shoes that impacted the character the most. A person’s posture changes with the shoes they are wearing. When he put on Ori’s boots, he knew he had it.

One audience member asked if anything was particularly difficult to film, and Brown told a story about the scene in The Hobbit: The Desolation of Smaug where the dwarves are inside barrels covered with fish. Brown has a phobia of fish, but after watching the stuntman test out being covered with the fish, he thought he could handle it. Because the dwarves are supposed to be small, the fish he was covered in were proportionally much larger. At the last moment, Andy Serkis, who was directing the second unit for filming, decided they needed more fish for the shot. Brown ended up being covered over his head with the fish in the barrel. The water and “fish juice” ran into his wig and between his prosthetic and his skin. Brown said he could push on a bubble in his prosthetic and have “fish juice” shoot out. After the shot was finished, Brown tried not to panic, but it didn’t take long for Serkis to realize Brown needed to get out of the barrel quickly.

Brophy said the scenes in the barrel on the river were his favorite to shoot just because the river was so beautiful and being in the cool water was nice in the heat of summer. Brown said it was hilarious watching Stephen Hunter, who played Bombur, trying to get in and out of the barrel in his fat suit.

During the whole panel, Parker had a lot of fun playing with the other cast members, and Brophy joked about something that left Parker laughing for several moments. Parker came out on stage with a traffic cone on his head. He used it as a prop to try to see and hear audience members better as they asked questions. At one point he put the cone on Brophy’s head to calm him after a particularly frenetic moment.

Boyd got a chance to talk a bit about the filming of Master and Commander: The Far Side of the World and being on the sea for over six months. He told a story about getting made up for a battle scene where the makeup artist was dribbling blood on him but the director decided it needed more blood. So instead Boyd had a bucket of blood thrown at him.

One popular question at panels like this is about pranks that are played on set. Brophy said that working with Martin Freeman was like working with a walking, talking prank, so they didn’t do much pranking themselves. Boyd told a story about when he and Dominic Monaghan were filming on location. They liked to drive themselves around, but neither of them had their cars, so they borrowed Sean Bean’s car. Before they returned it, they put a fish in the trunk and never told him about it.

During both panels, Boyd plugged his band, Bee Cake and asked everyone to follow them on Twitter @officialbeecake to give the other guys in the band a thrill and make them think they’re doing really well. Also, their music is on iTunes and they will be going into the studio soon to record a new album that they hope will be finished by the end of the year. Brophy has been sporting a Bee Cake t-shirt all weekend so far.

Both panels were immensely fun, and Boyd said there’s a chance he could be persuaded to sing “Home is Behind” at a future panel this weekend. If you want to see if he does, definitely go check out Sunday’s panel, “Hobbit and LOTR Guests” (11:30AM,  Marriott Atrium Ballroom)!