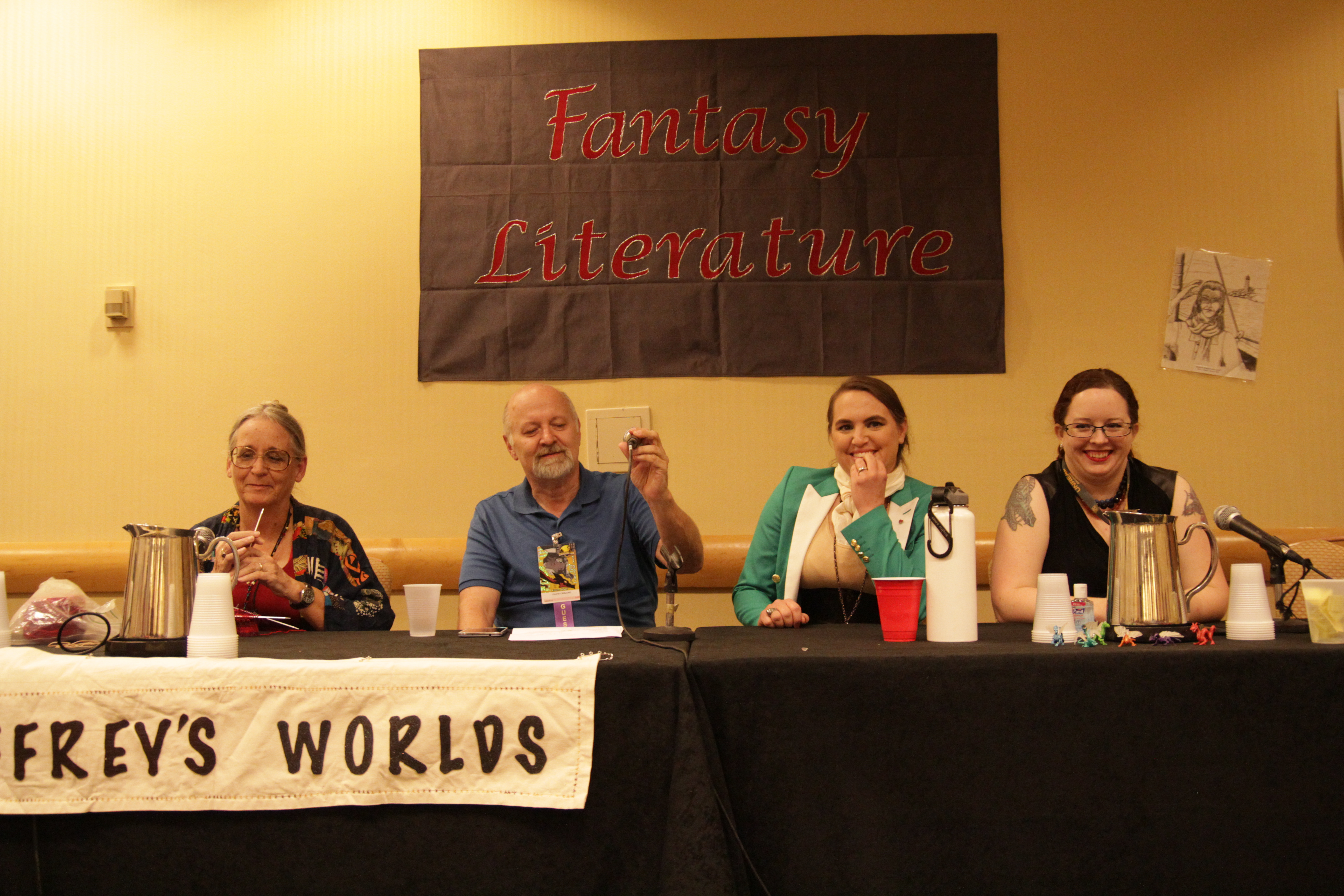 Moore asked the panel why some story character doesn’t just throw a magic missile and destroy everyone on the other side. Moon responded that a writer has a story to tell. What magic can do has to work within a story and its limits, with no deus ex machina effect. Farland pointed out the importance of conserving energy. How much would it take, he asked, to create a magical missile, and why do that if there’s another way to accomplish the goal while expending less energy?

Ezell added that readers are not idiots. Referring back to Moon’s point about the goal of the story, she added that the goal determines the places where magic—or technology—fits. Gates noted that some modern nations have the ability to wipe out others but don’t do it. Conquest, she said, needs a payoff, and mass destruction requires extensive rebuilding. “Deserts are not that useful unless you really like glass,” she added.

When the moderator asked the panel whether magical weapons were harder to write, Ezell responded that how a weapon is used and how it works are considerations with any weapon and that it must have limitations to interest readers.

Farland added that all science fiction or fantasy use of weapons must have moral consequences in order to be interesting. Logistics, too, he said, are important. A magic system must have rules, and the author must abide by them.

Moon said that the history of a culture in a fantasy should include where magic comes from and how and whether it affects the development of technology.

According to Ezell, any magical system requires the writer to decide how to apply the magic, especially militarily, with reference to the ways countries use it on a large scale and within smaller units. Gates noted that it’s not likely that everyone in a story can use even a well-developed magic. If that system is unstable, there can be unforeseen consequences. Citing the adage that no battle plan survives contact with the enemy, she indicated that magic could complicate the difficulty of making and implementing a battle plan. Where the magic comes from and whether using it depletes it are factors to consider.  Also important is the question of how many people in a military unit can use it.

The moderator asked the panelists whether they were drawn to particular forms of magic.  Ezell, who wore a Temeraire aviator costume, responded quickly, “Flight, because I know what it’s about.”  She added that helicopters and dragons are not that different.

Gates said she enjoys using biomechanical dragons in her post-apocalyptic American world and thinks they’re similar to helicopters. She also likes super-powered characters whose abilities are not easy to control and therefore cause unforeseen consequences.

Farland said that he tries to develop magic systems that haven’t been used before. When he wrote the Runelords, he spent about a year researching different magic systems in an effort to find something unique. Eventually, he realized he would have to make up his own rules and system for magic.

Moon noted that she likes to do things that are complex, such as different kinds of magic with restrictions on who can use each of them. She drew on her background in anthropology to give her different cultures magical traditions that might not blend well with each other. Even innate magic, she said, should have limits.

The moderator asked the panelists which sorts of magical battles they found most exciting, and what endgames such battles would have. Moon described a battle between innately magical magelords and  non-magical peasants in her book about Gird. The magelords had fire and water powers but lost the battle, in part because the mercenaries they hired had enough of fighting on the front lines while the magelords tossed magic from the rear, but also because the peasants had seen the magic enough that it no longer scared them.

Farland said he found magical battles uninteresting unless a character readers cared about faced mortal jeopardy. Magic needs an element of unpredictability or imbalance. A spell can fail if not performed properly or can have a greater effect than usual because someone has improved it.

To Ezell, the most compelling part of any story about combat or battle is the human element. She noted that people who have been in combat are not fighting for some cause so much as they’re fighting for the people beside them, who’re also fighting to save them, and that authors of such stories need to convey that sense, with or without magic. If magic is integral to that, she believes, it draws readers in.

Gates said she loved David Gemmell, whose heroes all had special gifts of some sort but faced overwhelming odds. They often had to work together to achieve their goals. In her view, his characters balanced their legends with reality, and the human element triumphed.

The moderator asked how the panelists kept  track of the action when writing big scenes. Gates said she was a communications and systems expert and so had charts. Moon indicated that she sometimes uses kitchen implements to choreograph space battles but also uses sketches and terrain or relief maps, which she marks with the action.

The panelists also use different resources in creating their battles. Moon draws on real battles from the pre-industrial era to the Civil War. In the first Paksenarrion book, Sheepfarmer’s Daughter, she drew heavily on one of Caesar’s battles. Ezell said she had recently enjoyed studying the Battle of Belleau Wood.

Farland, on the other hand, prefers not to use real battles but draws bits from different ones to make the whole. Gates noted that she had read military tactics from childhood and then had grown interested in Middle Eastern tactics after reading Ivanhoe. As a horse trainer, she also was interested in cavalry and studied its use on the steppes, among the Mongols, and in the battles between Crusaders and Arabs.

When asked why magical weaponry doesn’t evolve during a series, Farland commented that such evolution could violate, or appear to violate, the established magical rules and that the idea of a new type of magic would need to be grounded early in the story in order to maintain such consistency. Ezell suggested something like a magical Manhattan Project, working on a new spell instead of a bomb.  Gates said she’d recently bought a story dealing with the evolution of better magic and the risks of an untried system.

As the panel drew to a close, the moderator asked the panelists what magical convention they found most grating. Moon cited the idea that magic can be all-powerful. Gates said she dislikes “he is the one” stories. Farland chose having someone discover a magical power in the nick of time. On a similar note, Moon mentioned a series in which the lead character, whenever a new problem arose, developed a new psi power to address it.

The panel emphasized the importance of worldbuilding, consistency, and logical rules, including logistics and expenditure of energy for magical combat.  As a method for seeing whether a story element is believable, Gates suggested, “See if a kid buys it.”