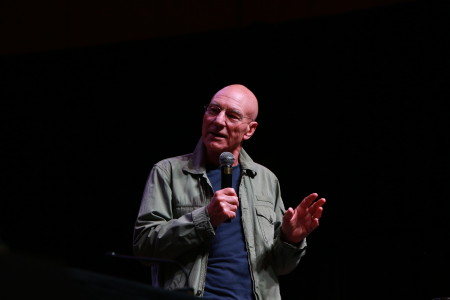 Patrick Stewart took the stage in the Marriott Atrium Ballroom, Fri at 1 PM, to thunderous applause and standing ovation. He promptly asked for the house lights to be brought up so that he could get a better look at the audience. Suffering from allergies, he asked for someone to get him some more tissues, to which a member of the audience promptly passed up a packet of tissues from her own bag.

While the audience Q&A was getting organized, the moderator asked a few questions, one of which had to do with Stewart’s knighthood. He asked whether Stewart liked being addressed with the honorific or whether it was strange. Stewart replied that he does like it, but that it’s still new to him. During his answer, the moderator knelt at his feet, which made Stewart laugh. There’s no need to kneel at his feet, but he did note that he should be addressed as Sir Patrick, as opposed to Sir Stewart.

Stewart is heavily involved with several charities such as Amnesty International USA, Refuge (an organization that helps women and children who are victims of domestic violence), and Combat Stress. He said that he’s involved with Refuge for his mother, who was herself a victim of domestic violence, and with Combat Stress for his father, who was (toward the end of his life) diagnosed with what would now be called PTSD.  Since there was no diagnosis for his condition when he first displayed symptoms, his father had to suffer through his entire life with this condition.

Recently, Stewart took part in the Ice Bucket Challenge to support research for ALS. The video of him writing a check, holding onto the ice bucket before taking out several pieces of ice with tongs and putting them into a glass, and then pouring himself some Scotch quickly went viral. The moderator acknowledged it as a far superior video to his own Ice Bucket Challenge video. He credited his wife with this unique presentation.

There will be a few chances to see Stewart on both the big and small screens soon. He recently filmed a movie in Bulgaria called Stuck, in which he plays a character stuck inside an elevator on the outside of a building under construction. During filming, he did a stunt where he had to hold onto the floor of the elevator and pull himself back inside the car. It was a moment of physical acting that he was particularly proud of. He is also hoping that a movie currently making the rounds of the Jewish Film Festivals will be widely released. Hunting Elephants was filmed in Hebrew, which Stewart’s character neither speaks nor understands. Finally, Stewart is entering a genre that he has never done before: a half-hour comedy. Blunt Talk will start filming in January for the Starz network, which has already ordered two seasons of the show.

Stewart ended the panel by passing on the best advice he’s ever received. It was from one of his acting teachers in drama school, but he noted that it has taken over 25 years for him to really understand it. The advice: “Never achieve success by ensuring against failure.”  It’s important to take risks and not to always make the safe choice.

As the panel concluded, Stewart signed the packet of tissues and returned them to the fan who had generously provided them as the audience cheered in appreciation for his time.