If this Daily Dragon reporter was forced to recommend only one panel to see, it would be the Being Human cast. Read along with me as I share a little story…

It all began on a hot and muggy Saturday evening in the Westin Peachtree Ballroom. Eager attendees filled the room, and after an engaging Bob and Carl skit, it was show time.

The lovely werewolf herself, Kristen Hager, was the first to appear on stage. She then introduced her on-screen hubby, Sam Huntington. He had the honor of announcing the man they call Sam Witwer. Finally, the lovely Meaghan Rath pranced onto the stage.

I couldn’t put my finger on it, but something was off. The guests quickly answered the first two questions, but Rath’s answer that her favorite deceased character to work with was her real-life brother, Jesse Rath, didn’t seem to fit.

Why is the Dragon Con backdrop starting to move? There’s someone struggling to emerge from backstage! Is that another Meaghan Rath, this one bound and gagged? Witwer quickly rushed to the damsel in distress and helped un-tape the newcomer. As she ripped off the tape covering her mouth, she exclaimed, “Who…who is this?!”

After a few moments of confusing squabble, the now un-bound Rath fiercely proclaimed, “You will have to knock us both out to find the real Meaghan!” With only a moment’s hesitation, Witwer knocked down Rath #1. At that moment, Huntington jumped into the fray. Time to un-wig the culprit!

The imposter was none other than Jesse Rath. His only response before spending the entire panel passed out on the floor was “And I would have gotten away with it, too, if it weren’t for you meddling supernatural roommates!”

And so began the first ten minutes with Being Human. The rest of the hour was filled with zany antics, a velociraptor impression, and an explanation of why Huntington’s farts are “the wind beneath the wings of the show.”

The audience was left with sore cheeks and this epic question for Hager and Rath: “How do you handle the extreme sexual tensions between the two Sammys?” To which this was the brain-burning response: 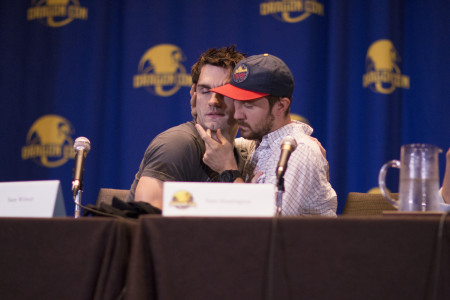