I noticed her while waiting for a Karl Urban panel on Friday in the Hyatt–a flame-haired Amazon in full battle regalia. She wasn’t the only warrior in the room, but something about her outfit arrested my attention, despite my intention to watch the witty bumpers and enjoy the chatter of other enthusiastic attendees. I studied her attire, from her leather battle skirt to the unusual coin mail that protected her shoulders.

They weren’t coins, though, those circular bits of metal, each emblazoned with its own colorful design. What were they? For some reason, I had to know. 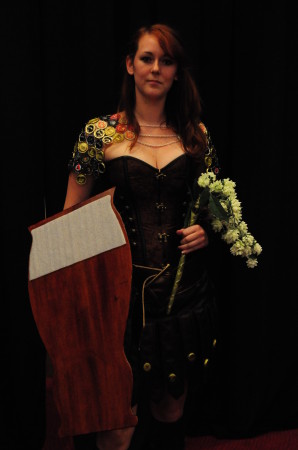 “Hi. Who are you supposed to be?” I asked, falling back on the standard Dragon Con greeting. I don’t recognize all the characters portrayed, but no one seems to mind. Except for her. She shot me a look tinged with astonishment and annoyance.

Um, right. Her nametag said Rachel Price, but I was game to play along. “And who might that be?”

Forget the tinged idea. Her eyes blazed with barely-contained fury. “I,” she said, “am the High Priestess of the Hangover.”

That was a new one. I realized that her oddly-shaped shield was, in fact, a mug of ale, complete with a layer of foam at the top. And the white flowers clutched in her fist? Hops in bloom, perhaps?

Foolishly undaunted, I laughed and asked her how she’d made her chain-mail-thingies. I’m lucky she didn’t smash them into my face or zap me on the spot, regardless of my teetotaling tendencies. Lucky for me, she controlled her rage and explained (as if to a preschooler) that the circles were beer bottle caps, each one pried off, pummeled flat, and linked together by her own delicate fingers.

I decided to refrain from asking why she was attending Dragon Con, but she glared at the surrounding crowd and told me: “[Every year] they pour a little out for their homies, but they never pour any out for me!” She shrugged, and her bottle-cap armor clinked a warning.

Only the high priestess? I began to wonder. As she frowned at the exuberant crowd, all blithely unaware of her presence, I got a distinct impression that there would be retribution in the morning.