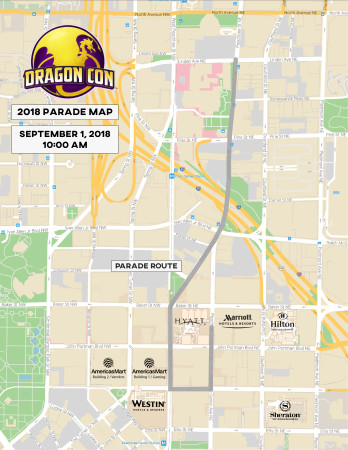 Don’t miss the highlight of every Dragon Con weekend as the 2018 Dragon Con Parade takes over the streets Saturday at 10AM. Grand Marshals Emilo Degado, Roscoe Orman, and Bob McGrath of Sesame Street will lead the way, along with Parade Marshals Joel Hodgson and Jonah Ray from Mystery Science Theater 3000, pro wrestling legend Ric Flair, and the Dragon Con 2018 Literary Guest of Honor, Steven Barnes.

In addition to perennial favorites like the 501st Legion Stormtroopers, parade viewers should expect to see new vehicles, including a Star Wars Sandcrawler, a Black Panther Sphinx, a Mandalorian skiff, and not one, but two Mystery Machines, along with their Scooby Gangs. Other guests will include Star Trek’s John de Lancie, former Bond girl Trina Parks, and author Dr. John Flynn. Dragon Con musical guests The Extraordinary Contraptions will be playing as well.

Be sure to get to the parade route early to stake out a good spot! But if you can’t be there in person, DragonConTV will be broadcasting the parade live to all five host hotels.