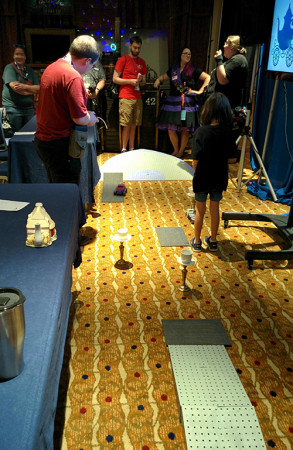 In preparation for the second annual Dragon Con Splendid Teapot Race, Elizabeth Wang Carpenter, race organizer, revealed tips and tricks to winning the competition. At 1PM on Friday afternoon in the Sheraton Augusta Room, it was standing room only. Carpenter was surprised that the majority of attendees was over the age of 10, which was the audience demographic she had prepared for.

Though it is a race by name, the Splendid Teapot Race is about more than just crossing the finish line in the shortest amount of time. Showmanship and an ability to successfully bribe the judges are considered at least as important as finishing the race course the quickest.

Carpenter shared a copy of the scoresheet which outlines the number of points a contestant can earn. After the difficulty in tallying the scores last year, Carpenter simplified things this year by making everything one point with a grand total of eight points. The way to earn those points includes introducing oneself and their racer to the audience and judges, creativity in the design of the racer, bribery, and successfully traversing the racetrack. In addition, each judge has an extra point they can award at their discretion.

An explanation of each of the items on the list revealed some amusing information. For example, during the introduction phase, contestants are graded on their appearance, their introduction of both themselves and their teapot, the length of time they take to complete their introductions (which should be a minute), and the audience reaction. After all, said Carpenter, it is imperative to win over the audience, otherwise how do the judges know who to award the point to?

The next item on the scoresheet, creativity, is determined by whether or not a teapot was used and the racer’s theme if there is one. Naming your racer is also strongly suggested. Bribing is next on the list with competitors providing food and drink to the judges to potentially win them over. The racecourse itself can earn racers up to four points, with a point going for each of the obstacles in the course.

Three obstacles make up the racetrack. The first is a cluster of teacups and saucers atop candlestick holders, the second is a split ramp, and the last is the “Ramp of Doom,” a curved ramp the racers must traverse. The fourth point is for completing the race in the allotted time of three minutes.  It is surprisingly difficult for the teapot racers to successfully pass these obstacles. For this reason, cheating is okay and no one is disqualified, but they won’t be awarded the point. For the final point, it is entirely up to the discretion of each of the judges as to whether or not they will even award that point.

The final suggestions Carpenter had for winning the race were to practice, and to go really, really fast. She went on to add you should know how the controller works so you can control the racer without running it into the audience.

The Splendid Teapot Race was Saturday morning at 11AM in the Hilton Grand East.