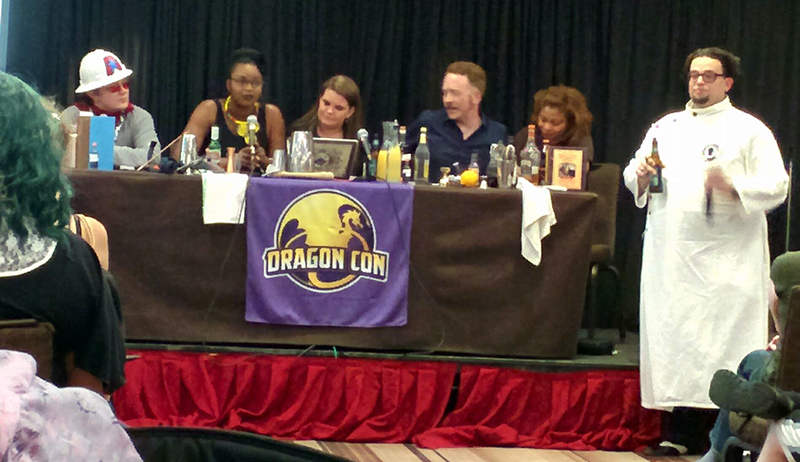 A panel of cocktail professionals addressed a rowdy group of cocktail enthusiasts Friday night at 10PM in Marriott A601–A602. A cash bar in the back of the room promoted the festive spirit. Headed up by track director Enrique Velazquez, better known as Doctor Q, and sponsored by Joystick Gamebar, the speakers talked about the history of their chosen spirits and introduced a cocktail for each that could easily be replicated at home.

The festivities started with Kysha Cyrus of Joystick Bar, who chose Vermouth as her spirit. Vermouth is very versatile, she said, with variety coming from the herbs found in the region it is made in. The cocktail she introduced was the Bamboo Cocktail, which is made with sherry, dry vermouth, sweet vermouth, and a twist of lemon. Known as a suppressor cocktail—a cocktail that is low in alcohol—the Bamboo is a drink that can be enjoyed all evening. Made from a base of fortified wine flavored with local botanicals, vermouth’s main benefit is its versatility. It can be drunk on its own or mixed with any other spirit. One key note Cyrus left us with is to make sure you refrigerate your vermouth.

Up next was Keyatta Holder-Mincey of Pictures and Cocktails, an award-winning cocktail program director and an award-winning documentary filmmaker. She chose to talk about rum, introducing the adaptable Rum Punch. Holder-Mincey touched on the storied history of rum with a couple examples of its path, with one story referencing the delivery of sugarcane by Christopher Columbus and the other story tracing back to slaves in the Caribbean. Any fruit juices can be used to personalize your punch. Holder-Mincey shared her recipe made with pomegranate juice, lime juice, lemon juice, pineapple juice, rum, dry curacao, and simple syrup.

Andrea Miller of Georgia Beverage Specialists spoke about her favorite spirit, gin. Made with juniper and a variety of botanicals, every gin has its own flavor profile. Attributing the renewed popularity of the spirit to the Juniper Breeze body lotion by Bath and Body Works, Miller often mentioned, “gin is f*#$ing delicious.” Doctor Q jumped in, telling the history of the British sailors who were prescribed to drink quinine to stave off malaria and gin for the medicinal properties in the botanicals. They tasted horrible on their own, but when mixed, the sailors loved it. She mentioned that gin is clean to drink, and if you are looking for something that won’t give you a hangover the next morning, drink gin. Before wrapping up, Miller mentioned that gin was the reason we have pubs. When pubs or public houses came into being, people were only allowed to drink at home. Pubs allowed people to be able to drink outside of the home.

Moving on to Evan Millman of the Ticonderoga Club, we learned about brandy. Essentially, brandy is made from the leftovers of the ingredients used to make other distillates that is then added to wine to help preserve it in transport. The fruits used to make brandy were apples and pears, with the Pennsylvania Dutch in the US making brandy with locally grown apples. Millman’s cocktail was the Belleview Rendezvous, made with 100-proof apple brandy, lemon juice, sorghum syrup, amaro, and a float of red wine. Doctor Q chimed in, saying the word “cocktail” came from brandy because the first cocktail was made with brandy. This led Millman to mention that the shipping of brandy from Europe, where they were drinking it “raw,” allowed the spirit to age in the barrel, mellowing it out and giving it rich caramel notes. He finished by discussing a cocktail book Doctor Q shared with the audience, Vintage Spirits and Forgotten Cocktails, which can be found on Amazon.

Last but not least, Rory Kennedy of Georgia Beer Garden spoke about absinthe. Mentioning that it has only recently been made legal in the United States, the spirit has a sordid history. It was outlawed due to a fear that absinthe has psychedelic properties and could cause psychotic breaks. In addition, the poor practice of some producers who made the spirit with deadly ingredients to make it cheaper caused illness and death. Kennedy and Doctor Q went on to talk about a 1905 court case in which a man drank seven glasses of wine, six glasses of cognac, coffee and brandy, two glasses of crème de menthe, and two ounces of absinthe. He then went home and proceeded to kill his wife and children. His lawyer successfully argued that it was due to “absinthe madness.” The verdict was picked up by the Temperance movement, and absinthe was banned across Europe and finally in the US.

Discussing the making of absinthe, Kennedy mentioned that, much like gin, absinthe is made with a variety of botanicals with a base of wormwood. There are two kinds of absinthe, blanche and verte, with the verte being more desirable due to the chlorophyll, which imbues more flavor as it ages. Kennedy chose Death in the Afternoon as his cocktail. Named for the Hemingway book, it is made with absinthe and champagne. Be careful with absinthe, Kennedy warned, as it is a “bully spirit,” meaning it overpowers the flavor of everything else in the cocktail. A little goes a long way.

The panel, which went beyond its scheduled end time, wrapped with a toast by Doctor Q: “My friends are the best friends. Loyal, willing and able. Now let’s get to drinking! All glasses off the table!”