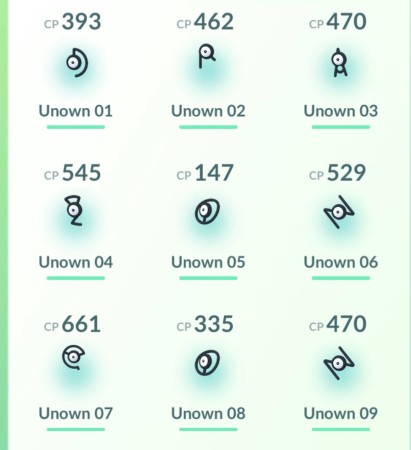 We have a huge gathering of pop culture enthusiasts for a con in Downtown Atlanta. What do we do but play games? One of the most popular games at the moment is none other than the Niantic/Nintendo collaboration Pokemon Go. If you are not familiar with the game, crawl out from under your rock and give it a try.

If you are a casual player, you may not yet be aware that Niantic has given Dragon Con a few treats for the long weekend. I wanted to give everyone a heads up about how to make the most of your time in Atlanta.

First of all, there is a Dragon Con 2018 gym outside AmericasMart Building 2, near the intersection of International Boulevard and Ted Turner Drive.

Next, and most exciting for this reporter is the release of seven Unown variants. Those variants would be the ones that spell out DRAGON CON—of course. Unconfirmed rumors have speculated that an eighth unown, in the guise of the exclamation point, may have also been released. So, look for those in the wild all over downtown.

Also, if you are fan of raids and talking Pokemon, don’t forget to join the Dragon Con Pokemon Go Discord—you can join using the Discord link: https://discord.gg/4gZyVC5. Raids will be organized and spawns will be discussed. You can even find someone to trade that elusive regional or shiny.

Finally, Niantic has announced the final global challenge, which conveniently coincides with Dragon Con weekend.  If North America can complete enough challenges this weekend then starting September 3 at 4PM Atlanta time, there will be special rewards.

If Pokemon Go is your thing, be sure to keep your batteries charged and have fun hunting!