Three days have passed. You’ve been to panels. You’ve seen stars, authors, artists, and legends. You’ve walked the aisles of the dealers’ room and seen their myriad of wares. You’ve strolled the maze that is the art show and were awestruck by the wonders you saw. You’ve seen the pretty ladies in the Dawn Look-Alike contest and marveled at their… END_OF_DOCUMENT_TOKEN_TO_BE_REPLACED

Results of the Dragon*Con Independent Short Film Festival were announced in the Hyatt Regency V Ballroom at 4:30pm Saturday by Bob Coughlin, following a six-hour screening of many of the films. This year’s selections ran the gamut of production values (low-fidelity video to 16mm color film) and subject matter (documentary to animated fantasy). Ethan Phillips, veteran of Star Trek: Voyager,… END_OF_DOCUMENT_TOKEN_TO_BE_REPLACED 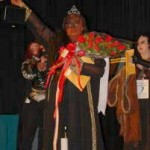 Ma’Jon of the Clan IpaQ (Marjan Peltier) wrested the Miss Klingon Empire title from seven other formidable warriors vying for the honor. Ma’Jon stalked Master of Ceremonies Eric L. Watts in formal attire trimmed with gold. She demonstrated her skills as the Head Chef of the Klingon Imperial Palace by stabbing and milking the young from a prized Klingon delicacy… END_OF_DOCUMENT_TOKEN_TO_BE_REPLACED

They don’t want no bulky Lou Ferrigno. They don’t want no sex god like Pierce Brosnan. They ain’t looking for no scoundrel like Han Solo. What girls really want is a man that can rattle off every unnecessary fact concerning Star Wars while espousing his theories on why the Empire lost. Well, look no further ladies because the second annual… END_OF_DOCUMENT_TOKEN_TO_BE_REPLACED

Magic: the Gathering™ Grand Prix tournament wound up Sunday when the German Marco Blume defeated Matt Linde of Maryland in an intense, fast-paced final round. The players tied with one game apiece by the time their names were printed for the scoreboard. Linde played with a black and white deck, while Blume’s deck mixed white, blue and green. Blume controlled… END_OF_DOCUMENT_TOKEN_TO_BE_REPLACED