Slash fiction has held its own in the Harry Potter canon of slash fiction for years, but it’s not a place actors go very often. Matthew Lewis, who plays Neville Longbottom in the HP movie adaptations, didn’t see it until a fan handed him a stack of stories. 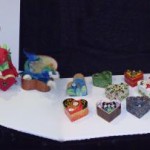 The Dragon*Con Art Show honored its former director, Dr. Patrick James Roberts (1962-2008), with a memorial Saturday evening and dedicated this year’s Dragon*Con Art Show and awards to his memory. Co-director Jon Parise narrated a video featuring Patrick and his interests.

In the Henry room at the Hilton, fascinating guests drop by the Science Track. Friday, August 29th at 7PM, Dr. John Cmar extolled the nasties of the latest infectious diseases wreaking havoc in our lives. Dr. Cmar is a physician at Johns Hopkins Hospital in Baltimore, Maryland.

The 501st Legion, Vader’s Fist, began right here at Dragon*Con in 1998.  A popular part of the annual Dragon*Con Parade, the Star Wars fan group, begun by founder Albin Johnson, now has over 4,000 members in 40 countries.   That’s a lot of white armor.   But the Legion consists of far more than just stormtrooper clones.

Amid the waving of scarves and wands, the “Meet the Stars of Harry Potter” panel began with the introduction of Matthew Lewis, who played Neville Longbottom. The first part of the hour was prepared questions ranging from particulars about the Harry Potter movies to more personal questions, such as his favorite TV shows. One of the responses brought laughter to… END_OF_DOCUMENT_TOKEN_TO_BE_REPLACED

If you’re thinking about taking up the dark-hunter challenge any time soon (after first having died the prerequisite tortured death and even grislier betrayal demanding vengeance), the must-have guided tour is The Dark-Hunter Companion (DHC) by Sherrilyn Kenyon with Alethea Kontis.  Alethea makes her influence known in the Introduction:  “There are very few people to whom Acheron Parthenopaeus owes a… END_OF_DOCUMENT_TOKEN_TO_BE_REPLACED

The Battlestar Galactica contingent stormed into the Marriott on Friday at 4PM with a star-packed eight-person panel. Although the title promised “Revelations,” few secrets were revealed. Attending Dragon*Con for the first time, Edward James Olmos praised the show’s writing and Ron Moore’s devotion to telling a great story. The man who plays the Admiral of the fleet spoke of how… END_OF_DOCUMENT_TOKEN_TO_BE_REPLACED

With a sense of wonder, fans stepped through the double doors of the Grand Ballroom at the Atlanta Hilton seeking T.V. heroes and movie stars. At every table, fans and guests interacted with smiles and conversation. At one table, Michael Rosenbaum gave a high five to one of his fans who responded with a grin. At another, fans crowded around… END_OF_DOCUMENT_TOKEN_TO_BE_REPLACED