The Parsec Awards honor SF and fantasy within the new frontiers of Portable Media. Podcast shows are nominated by fans, and finalists are chosen by a yearly steering committee. Those finalists are then voted on by an independent panel of judges. Awards are given in several categories ranging from content to audio quality and presented at Dragon*Con, hosted by the… END_OF_DOCUMENT_TOKEN_TO_BE_REPLACED 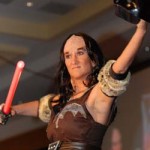 And the winner is…Warrior Ariam (Lucy Maria Boydston), of Hixson, TN.  [The Daily Dragon staff appreciates very much the subtle reminder received from Miss Klingon Empire 2008, Nej Vestai Le’nIvnav (Sonya Desilets), that the winner is really what the contest is all about.  Torture by ‘oy’naQ painstick will not be necessary.]  The Daily Dragon staff cowered behind red-shirts hired for… END_OF_DOCUMENT_TOKEN_TO_BE_REPLACED

Tad Beaty and Skip Faulkner shared a victory after over four hours of grueling play. Congratulations to Tad and Skip!

In 1998, Dragon*Con established the Julie Award presented annually in tribute to the legendary Julie Schwartz. The Julie Award is bestowed for universal achievement spanning multiple genres, selected each year for our esteemed panel of industry professionals.