Here’s an index of all the news, information, interviews, and articles we published for Dragon*Con 2011! 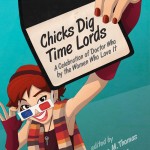 Fresh from the August 20 Hugo Awards Ceremony, Chicks Dig Time Lords contributors K. Tempest Bradford and Mary Robinette Kowal were still glowing in the reflected light of that hallowed shining rocketship when they sat down with the Daily Dragon to chat about their lives with the Doctor. Chicks, an anthology of loving essays from female fans of Doctor Who… END_OF_DOCUMENT_TOKEN_TO_BE_REPLACED

For those fans who, like me, are already missing Dragon*Con 2011 and already pining for Dragon*Con 2012 to arrive, here’s your chance for a bit of dragonish fun.  At the very first panel of the Writer’s Track (WRIT), Fri 10AM, I took copious notes on the interactive workshop “Write a Story in an Hour,” wrangled by author Gary Hayes, a… END_OF_DOCUMENT_TOKEN_TO_BE_REPLACED

Janet Cadsawan’s work embraces both art and literature.  Her Exhibit Hall booth delighted fans at 2011 Dragon*Con with designs inspired by the work of paranormal, urban fantasy authors.  After 9-11 left her without work, Janet decided to write the novel she always wanted to write.  Her choice of protagonist, a jewelry designer, made her realize that her mother’s love of… END_OF_DOCUMENT_TOKEN_TO_BE_REPLACED

Contestant photos were posted on the boards near the contest registration table in the Hyatt in front of the Centennial Ballroom. Voting ended Sunday at 5PM, the only event decided by popular vote at the con:

The 2011 Parsec awards were presented on Friday (9/3) at 4PM in Regency V (Hyatt), co-hosted by musician/podcaster George Hrab and author/podcaster Christiana Ellis, with musical entertainment provided by Marc Gunn. And the winners are: