With topics that range from the Tick to vampire dystopia, no challenge daunts the dynamic writing duo that is Clay Griffith and Susan Griffith. Their new Crown & Key books mesh fantasy superheroes with steampunk in an earlier era better known for its poets than its emerging tech. I asked the Griffiths about their new novels and other fan favorites.

Daily Dragon (DD): The Shadow Revolution, the first of your Crown & Key books, made its appearance only this year, quickly followed by The Undying Legion and The Conquering Dark. Will the Crown & Key continue past this initial trilogy as a series? If so, how many books are in the planning/writing stages and what is your target release schedule? 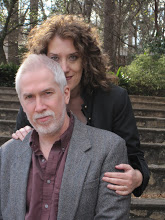 Clay Griffith and Susan Griffith (CG/SG): There are no current plans for more Crown & Key books, although that can always change. We would love to keep playing in that world. There are so many more stories to tell.

CG/SG: Crown & Key is historical urban fantasy. It is about a team of magicians/alchemists/monster hunters/steampunk tinkerers, all of whom are somewhat outcasts of traditional society, who unite to battle the forces of evil. The first book in the trilogy introduces our core characters. The team grows as the books move forward, so readers get to see the relationships develop over time. The overarching theme, as with a lot of our books, is the power of relationships and family, even a makeshift family cobbled together from outcasts, to overcome any obstacles.

DD: You’ve set the books a bit earlier than many steampunk stories. How does Crown & Key meet steam-tech expectations?

CG/SG: We thought it would be interesting to move it out of the typical steampunk period of the mid- and late-19th century when the Industrial Revolution was in full swing. Crown & Key is set around 1830, just before steam power completely altered the world. It’s an interesting period that lies between the rustic Regency period of Jane Austen and the dark smog-ridden High Victorian Era of Sherlock Holmes or Jack the Ripper. Crown & Key has plenty of steampunk elements, but gadgets are crafted by specialized arcane engineers for private use, not for commercial mass production. Steampunk hasn’t changed society in Crown & Key. Advanced technology is largely hidden or private, just like magic and mad science. So there are no airships floating over London or automaton butlers at Buckingham Palace. However, readers will encounter such things as steam-driven motorcycles and dangerous experimental weapons and even a few steam-powered cyborg apes!

DD: In interviews across the web, you’ve linked your newest novels to taglines that include a Bronte sister’s or Jane Austen’s work fused with The Avengers. What about Crown & Key brings to mind Bronte family images, a tortured soul wandering over the moors or through a crumbling mansion brimming with twisted secrets? How does this jive with Austen elements of repartee and romance? And how do The Avengers fit in?

CG/SG: We play off all those Brontesque elements. Family secrets. Social outcasts. The dangerous power of unrequited love. Rugged men with tousled hair in blousy white shirts. The trilogy spends a great deal of time at a sprawling country estate (as well as London and Paris and other places). Bronte and Austen wrote stories of manners, and our characters play off that mold, although in a twisted way. We have tea parties, but they involve werewolves. Evening promenades likely pass through graveyards. Unwelcome visitors show up at indelicate times, but they have the power of demigods. And The Avengers come in because we’re both comic book people, and group superhero books like The Avengers or The Justice League are great models for dynamic groups of powerful people.

DD: Without giving away too many spoilers, how do the novels rank on the romance-o-meter: too much for an action junkie, too little for a romance fan, or just right?

CG/SG: We’d say just right, of course. The romance-o-meter relatively is low for a standard paranormal, but relatively high for a standard pulp horror adventure. We specialize in “slow burn” romance. Our characters are too busy fighting for their lives or trying to uncover occult secrets to devote too much of their time to romance. Our couples are a team, developing their working relationship before they delve into romance.

CG/SG: Ah, glad you asked! As soon as the Vampire Empire trilogy was over, fans started asking for more. So…there will be a new book in the Vampire Empire series in November, 2015. It is called The Geomancer and we’re really excited about it. It is a standalone novel, not the beginning of a new trilogy. Technically it can serve as the 4th book in the series, but it is accessible to people even if they didn’t read the original trilogy (although we certainly recommend reading the trilogy, too!) The Geomancer takes place a year after the conclusion of the trilogy, and continues the adventures of Adele and Gareth. It is the beginning of an ongoing series of standalone Vampire Empire novels. We think fans will be very excited by where the series will go now.

DD: What other projects are you contemplating?

CG/SG: We are contemplating many things. We’re developing a couple of new fiction projects that we hope to shop around soon. And we would love to get back into writing comic books, so we’re talking to several publishers about that.

DD: Tell us about your Dragon Con schedule.

CG/SG: We’re busy on Friday and Sunday with panels. Saturday is our fun day with a book signing at noon, and then nothing but hanging out with friends and colleagues. Dragon Con is such a unique event and so many people we’ve met here are like old friends, we can’t imagine a year without a trip to Atlanta over Labor Day to see them.

“Transformations: Werewolves in UF”
Authors in the genre discuss their chosen variation of this intriguing supernatural being. Fri 05:30PM, Chastain ED (Westin).

“Dieselpunk and Raygun Gothic in the Media”
Alt-history subgenres dieselpunk and raygun gothic, from Tomorrowland to Hellboy. Sun 11:30AM, Augusta 3 (Westin).

Be sure to visit Clay Griffith and Susan Griffith: