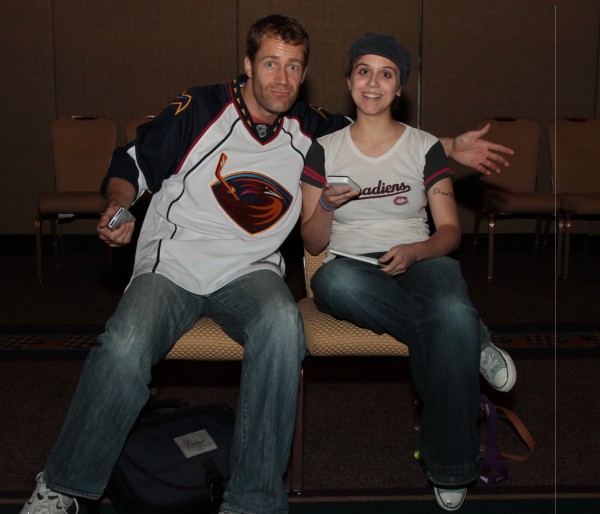 Daily Dragon (DD): How are you enjoying Dragon*Con so far?

Colin Ferguson (CF): I’m crazy. I’m so tired. I haven’t slept since…Friday morning at 1AM. That’s when I got up.

CF: [laughing] Oh, oh the kid’s tired, he’s not made for these sorts of things.

DD: I heard something about your plane being delayed.

CF: No, no. That story has been going around. It was never delayed. I had to work. [Erica Cerra] got let go and then [Neil Grayston] and I had to work past the last flight…the last flight out of Vancouver is, gosh, it’s early, it’s like 6:30, so if you can’t make to the airport by 5:30, you can’t get out of town. So Erica could make it and we couldn’t. So [Neil] and I got up at 1:30 and…ooo it was ugly.

DD: I know you’ve only been here a little while now, but so far what are you liking best about the convention?

DD: They gave that to you?

CF: Yeah! The Thrashers organization sent it over. How cool is that? I’ve never been to Atlanta before, and it seems like a really cool town. Like the people are really nice–I’m from Montreal and I find culturally the east coast and particularly the north and the south, like the far north and the far south have so much more in common that the west coast. The west coast is a totally different deal, and I’m more of an east coaster at heart.

DD: I visited Montreal recently and I love the city–friendly people.

CF: They’re great. And I find the same thing about down here. I mean, you walk around and people just present themselves and they care. There’s sort of a way of being that I just miss.

DD: What do you enjoy most about Eureka?

CF: I like the playground that it’s become this year. It’s become a really fun, fun place. It was a lot of hard work in previous years, and we were struggling to get the show on its feet and get it secure and get it stable.  Now that it is stable, the writers, the network, they have more faith to trust the other characters so they all get bigger plot-lines which means I get more time off work. And it also means that because I’m not the A-plot all the way through the thing I can be goofier. ‘Cause when you are just the A-plot you can’t; there’s not much latitude for goofing around because you represent the drama. So I like being able to sort of be a more supporting type character, in a sense, than I’ve been before.

DD: What do you think of the time travel twist?

CF: I like it. I’m so old [smiling], I really really enjoy what it did for the show…probably because I’m benefiting so much from what it did that I like it so much. I think everyone’s got a new sort of lease on life with their characters. Genius move making Fargo head of Global, ’cause we really did everything we could with [Ed Quinn] or [Salli Richardson-Whitfield] or someone else running Global. It was always the evil person running Global. We did that for like three seasons, and I felt burn on it, thought it was getting really old. So to put sort of the inept ally atop Global was a really good move for all the plot structures.

DD: It looks like y’all have a lot of fun onscreen. Does that carry over off-screen? Seeing you and Erica up on stage… [Colin and Erica spent most of the Warehouse 13/Eureka panel being silly and playing off each other]

CF: [laughing] Yeah, we have a really, really good time. They’ve become such close friends now, because your life transforms from being a work-a-day actor to being sort of financially secure to being made, in a sense, or known. And it’s a really difficult journey because your life changes in a lot of different ways. From where you live to sometimes who your friends can be. You lose people along the way, and to be with these people and to have gone through this journey with them brings you tight in a way that no one else will really ever know. They were there the whole time, they knew everything that everyone was going through as they were going through it. So you’re bound in a sense, and I love these guys. I mean [Neil], Erica, and Jordan–I’ve known her since she was thirteen. So yeah, we’re as close off [screen] as we are on.

DD: That about it unless you’ve got anything else you’d like to add.