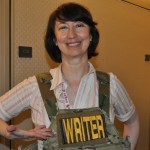 Author, humorist, editor, teacher, and self-proclaimed cat spoiler, Jody Lynn Nye will be teaching a writer’s workshop at Dragon*Con for the first time this year. The author of 43 books and hundreds of short stories, Nye writes science fiction and fantasy, often spiced with humor, both alone and in collaboration with other celebrated authors.

Daily Dragon (DD): The Writer’s Two Day Intensive Workshop you are directing at Dragon*Con 2011 is already sold out. Aimed at “help[ing] aspiring writers . . . practice their craft at a professional level,” the workshop will address numerous topics related to science fiction and fantasy genres. Of the pointers you’ll be passing on to your students, could you elaborate on your three most important tips to emerging writers?

Jody Lynn Nye (JLN): 1) Learn your craft. Everything counts: grammar, punctuation, spelling, research, character development, etc. 2) Read, read, read! (Unless you count that as three.) Playing D&D or video games and watching television will not teach you enough about the structure of written literature. You will also learn more about scriptwriting, if that is your goal, by reading books and stories. 3) Your god is Continuity; all things must be consistent throughout a work. If your character develops superpowers at the end of the book, you’d better have darned well telegraphed that possibility earlier on.

DD: You have written hundreds of short stories and, both alone and in collaboration with the incomparable Anne McCaffrey and the late, great Robert Asprin, more than 40 books with fantastic settings (including guides to Pern and, with Piers Anthony, to Xanth). What unique advice on world-building for writers can you offer based both upon the shaping of your own fictional worlds and writing in or about universes created by other authors?

JLN: Broaden your scope. I’ve been reading the work of a lot of young and aspiring writers, and the main thing they forget is how one change begets many. Think big. Even if your story is not science fiction, your setting will have its own laws of physics, such as the distribution, limitations, and process of magic. If your protagonist can solve all his problems by flinging tons of magic around, you have no story. Consider what it really means to make one change. As Theodore Sturgeon always said, “Ask the next question.”

DD: Your reputation as a humorist is well-known from your own writing as well as your collaborations with Robert Asprin in the whimsical Myth and Dragons Wild series. What advice can you offer to writers attempting to capture a comic tone?

JLN: Don’t force humor. If it’s not funny, it’s not funny. Don’t shove a point down your reader’s throat. Let the situation speak to you. People acting stupid is not really funny. People acting out of innocence with the best intentions can be very funny. The human condition is where we get our comedy as well as our tragedy. Exaggerate judiciously, pun with care, build absurdity on reality, and remember what is humorous in one culture may not be in others. Slapstick and cheap sniping do not really substitute for wit. Let your reader discover how clever you are. Watching a broad smile growing on a reader’s face is fabulous.

DD: Your latest novel, A View from the Imperium, (Baen Books, April 2011) is described as “P. G. Wodehouse meets space opera.” As a big fan of the TV series Jeeves and Wooster, I noticed that the “unflappable Parsons” resembles the iconic Stephen Fry (Jeeves). How did the Wodehouse canon affect development of your characters Ensign Kinago and his aide-de-camp Parsons, or are the similarities pure coincidence?

JLN: Well, Parsons resembles Jeeves, who was masterfully played by Stephen Fry. Thomas is the same genteel and overly moneyed silly ass about town, er, galaxy, as Bertie Wooster. Parsons, like Jeeves, does not waste time or energy flapping. He is too cerebral, but, as you saw, not without kindness or a sense of humor of his own. Thomas is like Bertie in that he seeks to avoid marriage as long as possible, while continuing to have a good time with his cousins and friends and indulging his hobbies. Thomas loves to help other people to enjoy themselves, too. He’s very generous. If he has, he will share. Like Bertie, he is all too distracted by . . . ooh, shiny!

DD: Can you reveal any other clues to the elusive subject of literary inspiration (those irritating questions “how/where do you get your ideas”), but only in the context of the origins of the Imperium and its engaging characters?

JLN: The Jeeves series has spawned a long and honored literary pedigree. Some of its offshoots include Dorothy L. Sayers’s Lord Peter Wimsey and the inimitable Bunter, and Dorothy Dunnett’s troubled but fascinating Lymond, of the eponymous Chronicles. Most space stories are about the common human or alien. I thought it would be fun to play with the aristocracy. If you think the Kinagos are eccentric, wait until the alien aristocrats in the next book.

DD: Your short story “Portrait of a Lady in a Monocle” (Steampunk’d, DAW Books, 2010, Jean Rabe and Martin Greenburg, ed.) is a delight of gadgetry and conviction. Do you think the Steampunk craze is more than just a passing fad? Why or why not?

JLN: I have enjoyed the Steampunk that I have encountered. The Wild, Wild West was a favorite television show of mine (had it bad for Ross Martin, the thinking girl’s crumpet, as one of my English friends puts it), and I adore Rube Goldberg devices. I love the idea of finding ways to accomplish in pseudo-Victorian manner the functions of modern technology. Our current gadgets lack the rococo style of past eras. An iPod is nice, but it’s more Danish modern than Baroque. I happen to favor Art Nouveau. Now, picture “Play that Funky Music, White Boy” coming out of a miniature mahogany-and-horn Victrola. I don’t think the craze is quite finished yet. Nor am I finished with it.

DD: I wondered if your monocle-d lady would discover other crime-fighting tools. Egad, she’s already a super-hero in a shirtwaist and corset, instead of tights and a cape, credited with inventing two break-through devices! Do you plan to write more tales featuring your plucky and brilliant inventor Penelope Galferd or other Steampunk genre characters?

JLN: Who knows? Penelope has plenty more inventions up her immaculate sleeves.

DD:  How did your love of cats feature in or affect your recent collaboration “Cata” written with John Ringo (in Exiled: Clan of the Claw, Baen Books, 2011, created by Bill Fawcett)?

JLN: The series began with a tetralogy from Bantam Books in the 1990s. The first book was called Lord of Cragsclaw. This anthology is a prequel. In it, humans have evolved from cats instead of apes. How could I not love that? All of the main characters are based on cats belonging to either me or John Ringo in the past or present. Their personalities correspond to the felines that bear their names. Petru, now no longer with us, alas, was a wonderful, flamboyant personality who loved having body glitter blown onto his fur. Really.

DD: In an interview last year with Inspired Quill, you listed Terry Pratchett, Mark Twain, and Dorothy L. Sayers as three authors you would invite to tea. But you also noted that you would prefer a “Large garden party” with other authors you admire. We have a little space here for a lovely garden, so could you list a few of those other authors to invite for our party, especially those who might fire up Daily Dragon fans?

DD: What new books and/or stories may we anticipate from the pen of Jody Lynn Nye in the near future?

JLN: I have another Dragons book and another Myth Adventure under contract. Myth-Fortunes comes out in mass market from Ace in November 2011, and Myth-Quoted sometime after that. I have a Steampunk story called “Lone Wolf” that was fun to write coming out in a collection called Westward Weird. I’ve got a bunch of things I’m working on. I hope you’ll enjoy them.