Kate Mulgrew is probably best known to fandom as Captain Janeway from Star Trek: Voyager, but her genre credits don’t end there. She’s currently part of the cast of Adult Swim’s NTSF:SD:SUV::, a funny send-up of CSI/NCIS/24-type shows written by comedy geek Paul Scheer. She graciously took a few minutes to speak to the Daily Dragon just after her Sunday morning signing. 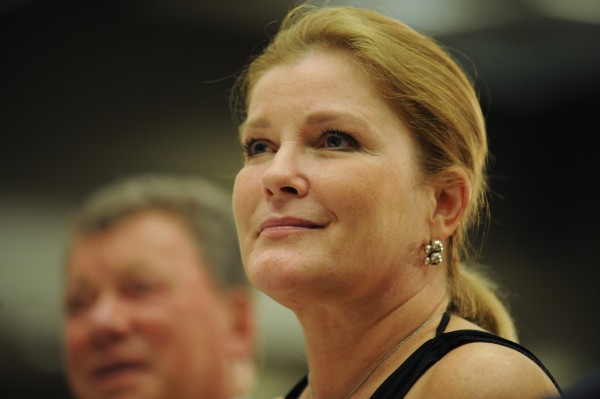 Daily Dragon (DD): I’ve been watching NTSF:SD:SUV:: and loving it. How did the role of Kove come about for you? Did you approach them?

Kate Mulgrew (KM): They called me with an offer, and I said send me the script and let me look at it. And I was laughing so hard when I read it I couldn’t get up off the floor. I called Paul Scheer and said: Please, book me. And it is unbelievable fun. They’re smart, funny, wonderful guys. I couldn’t have been happier.

DD: They all seem very geeky and fun. There’s a lot of geek humor and geek pride on the show.

KM: They are very geeky. But behind every great geek there’s a genius. I’ve always said–high intelligence.

DD: You’re in New York right now doing a lot of theatre projects as well. Was the plan to do theatre and television?

KM: Always. I trained as an actress in the theatre when I was very young, and it was always what I wanted to do. I started there and then television came in and it never stopped. And so I’ve tried to do the double dance. It still seems to be working. I did Hamlet recently and Cleopatra last year, and it’s all great. It’s what keeps my soul alive.

DD: When you did your Captains interview with William Shatner, what did you take away from that experience? Any new thoughts on Star Trek or your performance as Captain Janeway?

KM: My greatest thought was that we really must break the glass ceiling here in Star Trek. It’s not enough that I was the first female captain. There needs to be a continual push to open the door for women in positions of authority. In an absolutely equal way, of course. In talking to Bill I thought: This has been very much a boy’s club for a long, long time. I had the privilege and honor to be the first female, but that’s an establishment that needs now to be developed.

DD: With the reboot happening in movies, do you have any insights on what’s down the line with Star Trek? Do you think we’ll see characters from Voyager and the other next gen shows but with different backgrounds?

KM: They’ve worked long and hard for the past few years on the prequel notion. But I think they should go on and develop what happens to the characters after Voyager landed. In a movie.

DD: Yes, in a movie! Because there were books, but I say that’s not enough.