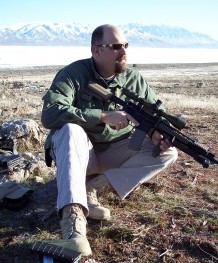 From his humble beginnings practicing “the ancient art of Portuguese Shovel Fighting” to gun dealer, firearms instructor, accountant, and now the New York Times and Amazon best-selling author of two action-packed fantasy series, Larry Correia will appear at Dragon*Con for the first time this year. And “at Dragon*Con, there will be hats.”

Daily Dragon (DD): Larry, how did your addictions to B horror movies and guns lead to the creation of your best-selling Monster Hunter International (MHI) series (published by Baen Books)?

Larry Correia (LC): Several years ago I was reading a humor thread called Lines I’d Like to Hear in a Horror Movie Someday, on an online gun forum called The Firing Line. In this thread were a lot of really funny posts by the types of people who if they were the protagonists, most movie monsters would be dead before the opening credits finished.

These are the folks that often find themselves shouting at the TV, “Why don’t you just get a shotgun and blast the stupid thing?” And they basically inspired me to write my first book. So as a huge horror movie geek and gun nut, I set out to write a something that was a salute to every B movie trope I could think of, combined with protagonists who looked at the existence of monsters as a business opportunity more than anything.

When I got done, I felt that it was pretty darn good. And then I spent the next couple of years getting rejected by everyone in the publishing industry. Finally, I self published MHI, and it turned out to be a hit. That’s when I met my publisher and now I have a ton of things under contract with Baen.

DD: Your recent release Monster Hunter Alpha (MHI series #3) rose to #23 on the New York Times bestseller list, joining Monster Hunter Vendetta (MHI #2) for the prestigious NYT sales recognition. You’ve also enjoyed rankings of #1, #2, and #30 in fantasy book sales on Amazon. To what do you owe your sales success? Don’t just tell me your fans bought a lot of books; there has to be more back story. What previously unrecognized niche did the MHI series fill?

LC: The Monster Hunter series is a lot of fun and it doesn’t take itself too seriously. There’s a big market out there of readers who only want their vampires to sparkle when they are on fire.

I’ve been really lucky. My fans are awesome, and because of their enthusiasm my books have had great word-of-mouth advertising. All of the sales success I’ve had is directly proportional to how great my fans are.

DD: Joining the ranks of authors like the stellar Lois McMaster Bujold, you were nominated this year for a Campbell award (John W. Campbell Award for Best New Writer), but lost (to rising star Lev Grossman, The Magicians and The Magician King). Are you at all concerned that, in spite of the nomination, your books may not overwhelm literati? Just who reads books by the self-styled “pulp-monsters-explosions guy” anyhow?

LC: It was a surprise and an honor to be nominated, and there really isn’t any shame to losing when your competition is some of the best new writers on Earth. I was just happy to be there.

As for the literati-academic-elite, honestly, I consider myself a pulp writer. My job is to entertain my readers, not to preach at them, or “make them think,” or to promote some cause or message. Most of us read books for fun. My readers pick up a Larry Correia book so that they can read about a teleporting magic ninja fight on top of a flaming pirate dirigible, not to read about the plight of the endangered rainforest polar bears.

DD: While purchasing your books, I was told by a teen-aged fan that you were his favorite author. Have you ever considered writing specifically for the young adult (YA) market? Why or why not?

LC: I’ve not specifically written anything for younger readers, though when I go to the bookstore and I see all of those 200- or 300-page YA books, while I’m super busy churning out 600-800–page books, I kick myself for being in the wrong business.

That said, I am surprised by how many young readers I’ve got. I get a lot of emails from mothers that are some variant of, “Johnny hates to read, but he read Monster Hunter in three days!” Those emails make my day.

Maybe in the future I’ll write something YA, I won’t rule it out.

DD: Dead Six, your book co-authored with Mike Kupari, is slated for release later this month, but is available from Baen as an ARC now. Mike is Air Force EOD (Explosive Ordnance Disposal), stationed in Afghanistan. What was it like to write with a soldier who works with explosives professionally?

LC: Mike is my best friend. We actually wrote the rough draft live on the Internet for what would become Dead Six back before I self published MHI. Dead Six is a military thriller, and it is a little different from most collaborative works, in that there are two point-of-view characters, one written by me, and one written by Mike. And they are not friends. In fact, they spend most of the book trying to murder each other.

After I started having a lot of professional success, I talked Mike into cleaning up our original Internet experiment and trying to sell it to a publisher. The final version is much better (and twice as long). Overall, I think it is one really solid thriller.

This is Mike’s first book, and he will still be deployed to Afghanistan, doing dismounted patrols with the Army, defusing roadside IEDs the day Dead Six comes out.

LC: Dead Six takes place in a small Persian Gulf nation during a violent military coup. One character is with an elite group of mercenaries, only they are standing in the way of the other character, who is an assassin on a mission. It gets pretty brutal.

There are two sequels planned, Swords of Exodus and Project Blue.

DD: Your second series, the Grimnoir Chronicles, began this year with the release of Hard Magic, to be continued with the November launch of Spellbound. How is this series different from MHI? And if I like the hard-hitting action I’ve come to expect from you, will I be disappointed with a bunch of wimpy, wand-waving wizards?

LC: My wizards are much more likely to wave a Tommy Gun than a wand. The Grimnoir Chronicles is an alternative history/fantasy, set in a world where magic appeared in the 1850s. Hard Magic takes place in 1932, and it is about a magical secret society led by Blackjack Pershing and John Moses Browning battling Imperial Japanese samurai for control of a Tesla super weapon. Think Great Depression, gangsters, zeppelins, and super powers, and you get the idea. I’ve had a lot of reviewers call it Diesel Punk, and that fits as well as anything else.

The reviews on Hard Magic have been really good. I put a lot of research and work into this series, and I’m very proud of it.

DD: You also wrote a story with Steve Diamond, “Son of Fire, Son of Thunder,” in The Crimson Pact 2, an anthology based on a shared world, with demons. What did you like or dislike about writing in a world created by someone else (author Paul Genesse) and governed by that world’s rules?

LC: Luckily, Paul Genesse did a great job as editor, and let his writers have fun with the concept. The story I wrote with Steve turned out great. Steve’s character is an FBI agent that literally can’t die, and mine is a US Marine that not only can die, but knows the exact time that he will die down to the second. Which, in the meantime, gives him a lot of leeway in how fearless he can be while killing demons.

DD: When can we expect to see your space opera collaboration with John Ringo? Can you give us any hints at what to expect from this joint effort by two greats who have a certain literary affinity both for gunfights and blowing things up?

LC: This is going to be a fun one. John is a terrific writer. Basically, it is a post-apocalyptic Steampunk adventure. Right now we are still in the early stages of the project, and I’m really excited to be working with one of the greats.

DD: You mention on your blog that MHI hats will be available at Dragon*Con, courtesy of your publisher, Baen. As a new fan, how can I merit an MHI hat?

LC: I believe that they will be handing them out to the fans at my different panels and events. I really need to make sure that I save some for my kids.

Read more about Larry Correia’s exploits on his blog Monster Hunter Nation, including these details of Larry’s 2011 Dragon*Con appearances: