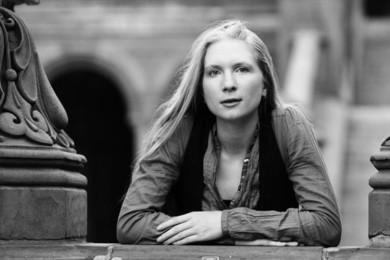 Victorian costumes and enthusiasm for all things Gothic. Leanna returned this year and shared news of her myriad literary and acting adventures and accomplishments.

Daily Dragon (DD): Your latest novel, The Twisted Tragedy of Miss Natalie Stewart, in your Magic Most Foul series is slated to appear in November 2012. What can you tell us about this latest installment without spoiling the wonders which are surely in store for your series fans?

Leanna Renee Hieber (LRH): We pick up exactly where Darker Still leaves off, and in this book we see brave Miss Natalie and dashing Lord Denbury become an awesome team as they track and solve another unfolding paranormal mystery. It’s a scarier and more action-packed book with fabulous new characters and more homage to Victorian Gothic literature. My editor says this is the best book I’ve written; I can’t wait to share it with everyone!

DD: You recently starred as an auror with the fictional New York City Department of Magical Protection.  Tell us about that production and what it was like to play a paranormal character that could have been lifted straight from the pages of dark fantasy?

LRH: Working on Auror’s Tale (a wizarding fan web series) has been amazing in every way. Our first episode will be airing soon so stay tuned to the Auror’s Tale YouTube channel! It’s a great premise with extraordinarily talented people on board and it’s just so much fun to play in the magical Potterverse but not with any established characters (this project is not affiliated with JK Rowling, Warner Brothers, or Time Warner), just the premise of what might happen in the field of the Auror’s Office in New York City as they fight crime in the magical underworld. As a huge HP fan, this is a dream come true. We’ve had support from wonderful Kickstarter backers, from media like MuggleNet and thrillingly, from Alivans who are making gorgeous wands for the production. You can see the wands already being used in the production at the Alivans shop, with more specially designed wands to come. It’s all very exciting.

DD: Gothic to the core, you often wear exquisite Victorian gown at conventions.  How does your interest in period costuming enhance your acting or writing and how?

LRH: Why, thank you! It’s just me, this is who I am. I grew up a lover of all things Gothic, spooky, romantic and darkly beautiful, so my books and my wardrobe are an extension of my great loves and it all just works really well together. I think it’s important to have a working understanding of the clothing of whatever time period you’re writing in, especially if you’re writing Victorian women, it’s important to know what life is like in a corset. It’s also a really great way to open up conversation about my books: whenever people say “I love your outfit,” I say, “If you like my clothes, you’ll like my books; I dress like I write!” If I can’t actually time travel to the Victorian era, I figure dressing up and writing books is the next best thing.

DD: You thanked Oscar Wilde for his character Dorian Gray as part of the inspiration for the portrait motif in Darker Still. Will the portrait be a continuing part of the story arc for the series or will it depict an empty room?

LRH: Great question. The portrait is referenced often in how Natalie and Jonathon move forward and ascertain the breadth of the Master’s Society operations, and the painting factors into Natalie’s nightmares. As her nightmares are prophetic… you’ll just have to read and see what those nightmares actually reveal.

DD: What other new works in progress can you share with your Dragon*Con fans?

LRH: I’m so excited to have just signed a deal with Tor Books (Macmillan) for a new Gaslamp Fantasy saga, The Eterna Files (working title), releasing in 2014. It’s a quirky, character-driven tale centered around a paranormal arms race for immortality between London and New York City in 1882. I’ll be filming Auror’s Tale for a while yet, as we’ve many episodes yet to film and air. My Gothic Victorian short story “Too Fond” will appear as part of Tor.com’s upcoming “ghost week” this October. I’ve got a short story in Tor’s Gaslamp Fantasy anthology Queen Victoria’s Book of Spells (March 2013, Tor) and we’re looking to re-release the Strangely Beautiful saga as soon as we can following the demise of Dorchester publishing. I’ll be presenting and assisting on the literary track of Misti-Con, an awesome Ministry of Magic themed Harry Potter convention in May 2013, Misti-con. And as always, I’ll be fairly visible on the convention circuit, promoting the Magic Most Foul saga as we gear up for The Twisted Tragedy of Miss Natalie Stewart this November. I tweet all the time. I love you, Dragon*Con; you’re my favorite convention of all and I really appreciate the opportunity to chat with you today. Blessings and best wishes!