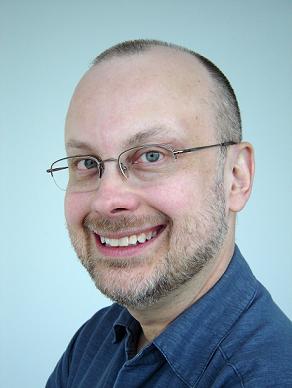 Robert J. Sawyer is the Hugo, Nebula, and John W. Campbell Award-winning author of 19 science fiction novels and is the only author ever to win the top SF awards in the U.S., China, Japan, France, and Spain. The ABC television series Flashforward is based on his novel of the same name.

Daily Dragon: Welcome to Dragon*Con as a Special Guest. Science fiction provides an opportunity to analyze and question humanity’s political, social, racial, economic, and ecological choices. Is this opportunity to debate important issues through a forum that makes the topics more accessible to people what drew you to the genre?

RJS: Absolutely! I came into the genre through the original Star Trek and Planet of the Apes—both of which were rich with social and political comment. As a kid growing up in the 1960s, I was stunned to see all the topics you mentioned being big parts of the evening news but then disappearing when the prime-time shows like Get Smart and Gilligan’s Island started. It was only in science fiction that I was finding a serious engagement with real-world issues. And when I started reading the stuff—especially H.G. Wells—it was clear that this was even more true in the written form. The Time Machine has nothing to do with the year A.D. 802,701; rather, it’s about the evils of the British class system. War of the Worlds has nothing to do with a Martian invasion; rather, it’s about the evils of British colonialism. I take great pride in following in H.G. Wells’s footsteps and using SF as a medium for social comment.

DD: Your website, www.sfwriter.com, has over one million words and 25,000 links. Your latest novels, Wake and Watch (and the upcoming Wonder) examine the waking of the mind of the World Wide Web. What about the internet has not only captured your imagination and attention, but gripped it like a vise since 1995?

RJS: I was the first SF writer to have a website, and the first Canadian writer of any type to have one. I knew in my bones that this newfangled thing called the World Wide Web was going to change the entire planet. In fact, I make the case in my WWW trilogy that Tim Berners-Lee, who invented the World Wide Web, should be awarded the Nobel Peace Prize; he’s done more than anyone else since the end of World War II to bring about world peace and foster understating between disparate people. William Gibson and the other cyberpunks saw the future of computing as being dark and gritty, but I always knew that it would be bright and positive.

DD: You’ve been referred to as the “Dean of Canadian Science Fiction” and you have helped many up-and-coming authors to develop and hone their skills. What’s the simplest and most important advice you can share with new writers?

DD: When you’re working on a first draft, do you set word count goals each day, or do you set goals based on time spent writing?

RJS: I’m a piece-worker: I do 2,000 words per day. If I’m really cooking, I can get that done in ninety minutes; if I’m not, it can take twelve hours. Whatever it takes is how long I work that day—so the carrot is obvious: I can call it quits and read a book or go to a movie once I’ve hit my goal; that gives me an incentive to actually get my butt in the chair and get the words out.

DD: Growing up, which authors influenced you the most?

RJS: First and foremost, Arthur C. Clarke: he taught me that you can be metaphysical without being flaky, and I learned how to convey the sense of wonder from him. After that, Frederik Pohl—I think his Gateway is the best science-fiction novel ever written. Also, James White (whose “Tableau” is, I think the best science-fiction short story ever written), Isaac Asimov, Hal Clement, and Larry Niven.

DD: What are three books you’ve read that resonated with you?

RJS: On the nonfiction front, The God Delusion by Richard Dawkins. I wish his tone were less pugnacious—I can’t imagine anyone who didn’t already agree with him sticking around through the scorn until the end; still, it’s a great and important work. Also, Outliers, by Malcolm Gladwell, which I found as fascinating as Gladwell’s other books. On the fiction front, I think the novel The Time Traveler’s Wife is a magnificent work of science fiction (and so much better than the movie!), even though it wasn’t published as science fiction.

DD: You offer free copies of your short fiction on your website, and much of your work is available at Fictionwise.com. The publishing business is only beginning to embrace e-publishing. Do you own an e-book reader? Which formats do you think will eventually become the standards?

RJS: I own more ereaders than I can count; I’ve got a YouTube video up giving a tour of them all. There’s no doubt that ePub is going to be the standard everywhere but Amazon.com, where they’re pushing a proprietary format. But, I gotta say, most modern ebook readers fall way short of the functionality that eReader or Mobipocket software on the Palm platform offered six or seven years ago; it’s amazing how slap-dash and feature-poor the implementations for dedicated hardware (such as the Kindle, nook, or Sony Reader) and modern devices (such as the iPad) are.

DD: Your novel, Flashforward, was recently developed into a television series on ABC, and you wrote one episode. What did you like most about writing a script versus a novel?

RJS: The per-word rate. Lots of SF print markets still pay three cents a word. Scriptwriting begins at three dollars per word. But I also loved the change of pace. When writing a novel, you do a lot of interior monologue, getting into the characters’ heads; for a script, you don’t do any of that—which means you have to find other ways to convey the story points you’re trying to make. I’d done a good deal of scriptwriting prior to FlashForward, including a couple of commissioned series pilots, one of which had William Shatner attached as Executive Producer; one of the fondest memories of my career is going around Hollywood with Bill Shatner, pitching our show.

DD: You posted many times on your blog about being on the Flashforward set and meeting the actors, writers, and directors for the show. What was the most enjoyable story you can share with our Dragon*Con attendees?

RJS: All of it was a joy, and the actors were great. But I enjoyed most of all the two weeks I spent in the writers’ room for FlashForward, helping them break the episodes that followed our hiatus. Every one of the staff writers was great, and they let me join their team completely. I’ve never enjoyed collaborative work in the past, but this I thoroughly enjoyed. Still, I suppose if I had to pick an actor-related moment, it would have been me sitting in Janis Hawk’s chair on the FBI bullpen set, and John Cho coming in. He spotted me from across the room, held up his copy of that week’s script—which was “Course Correction,” the one I wrote—and gave me a big thumbs up. That meant a lot.

DD: You’ve been known to enjoy a variety of classic SF television series. Which show would you most like to sit and watch with a few young people, to hook the new generation of fans on the best of what has come before?

RJS: Still, and always, classic Star Trek—the original series. There’s nothing better. But, since The Six Million Dollar Man is coming to DVD in North American finally, I’d also make a case for some of the best episodes of that show, including the Hugo Award-nominated pilot written by Henri Simoun from Martin Caidin’s novel, Judy Burns’s “The Last Kamikaze,” Kenneth Johnson’s “The Price of Liberty,” Peter Allan Field’s “The Seven Million Dollar Man,” and D.C. Fontana’s “Straight On ’Til Morning.” Most SF fans will recognize those writers’ names from work they did on other series—but some of their very best work was on Six Mill.

DD: The profound improvements made in the visual effects field over the past ten years have truly changed the nature of science fiction on both the big and small screens, so much so that viewers can hardly tell fiction from reality. Which effects do you find the most truly amazing?

RJS: Avatar was amazing in Imax 3-D. That’s so immersive, it’s just mind-blowing. That said, I still find that most CGI leaves me cold; I prefer good old-fashioned spaceship models to CGI. Yes, J.J. Abrams’s Star Trek from 2009 looked great, but even though they worked really, really hard to make the ships realistic, there’s still a fake quality to them.

DD: If you had a magic wand (yes, I’m straying a little into the fantasy realm for a moment), which SF technology would you most like to make a reality? And you can’t pick flying cars, because we all want them!

RJS: Complete, flawless, automatic life recording, as I portrayed in my Hugo Award-winner Hominids. I’d love to have a perfect record of everything I ever did or said, and everywhere I’ve ever been.

DD: Time travel is a recurring theme in the genre. If you could travel back in time, perhaps twenty years, and have a coffee with the younger Robert J. Sawyer, what advice would you give him?

RJS: Relax: you’re going to make it. You’re going to win the top awards in your field; there’s going to be a big-budget TV series based on one of your books; you’re going to successfully publish a book a year for the next two decades. I spent a lot of the past twenty years worrying about whether I was going to succeed—not without justification, given that most SF authors publish a few books, then are dropped for poor sales and never heard from again. It would have been quite comforting in my own personal case to know what the future held.

DD: And if your time machine could dial back to any time period, which person or event would you most like to see?

RJS: I have a huge, huge fondness for dinosaurs—they show up all the time in my novels, and I originally planned to be a vertebrate paleontologist. And, like many an actual modern paleontologist, I was first inspired by Roy Chapman Andrews’s book All About Dinosaurs, which told of the adventures he had in the Gobi desert, hunting fossils; he’s often credited as being the inspiration for Indiana Jones. I’d go back and join Roy Chapman Andrews on those exhibitions in the 1920s.

DD: This isn’t your first Dragon*Con. What about this convention keeps you coming back for more?

RJS: The incredible dealers’ room. My home is filled with science-fiction collectibles, and there’s no better place to find them than here.

DD: Thank you very much for graciously giving of your time with us today, and we hope you enjoy the convention.