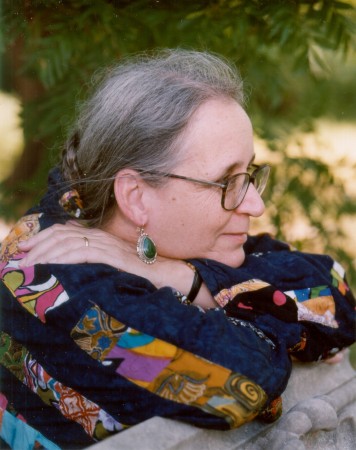 Nebula Award winner and former U.S. Marine Elizabeth Moon has published more than 20 novels as well as three short fiction collections and more than 30 short fiction pieces. Her latest release is Crown of Renewal, the concluding volume in the Paladin’s Legacy series.

Daily Dragon (DD): Your website says you started writing very early but didn’t discover science fiction until around 9th Grade. What about reading science fiction inspired you to write it?

Elizabeth Moon (EM): As a child and through high school I wrote whatever I was reading… dog stories, horse stories, spy stories, military stories, sports stories, adventure-in-the-woods stories, poetry, even plays. If I read it, I tried to write it. So when I started reading SF, I started writing SF… it was another sandbox to play in.

DD: Your first published novel, Sheepfarmer’s Daughter, is about a young woman, Paksenarrion, who runs away to become a soldier rather than marry the man her father chooses. What led you to set a story about a female soldier in a pre-industrial world?

EM: Female soldier: because I’m a veteran and at the time I was not seeing what I considered reasonable female soldiers in fiction. Pre-industrial: because my first degree was in ancient and medieval history. Fun as it is to write about women in far-future societies involved in space warfare, it leaves my medieval history roots dangling.

DD: What inspired you to write the two books about Gird?

EM: It was the only way to find out what Gird and Luap were really like. Writing is my way of discovering stories and the characters who make them.

DD: Gird and Luap are complex, but still flawed, characters. What made you choose to write a character like Luap who makes such a huge mistake that it takes 500 years and a paladin to correct it?

EM: I had to show that despite Luap’s good qualities, he had a fatal flaw—one that no amount of good qualities would overcome. Many real-life historical figures have had the same one, the inability to see themselves clearly enough to realize where their limitations are. In SF, we write a lot about people overcoming limitations… but it’s equally important to realize (and for characters to realize) what those limitations are. The weakness you don’t recognize—the error you don’t acknowledge—can’t be fixed. So Luap continued to believe he already was the person he wanted to be, instead of really understanding why Gird kept insisting he wasn’t.

This character flaw—this inability to face and admit one’s own character flaws—spells trouble for anyone who follows such a leader. And we all know people like this: their problems are always someone else’s fault; they are “held back” by others who don’t realize how talented they are. When they have a measure of charisma, and they’re talking a position others want to believe, they can gain power—and then they drag their followers into a pit. I had historical figures (including contemporary ones at the time I wrote it) in mind (and one of them did indeed go right on to screw up in much the same way, and for the same reasons, as Luap).

I find the mechanisms of failure fascinating, as well as the mechanisms of success, and the mechanisms of change. Luap is, however, most readers’ least favorite character, in part because he is fundamentally weak and also… it’s so obvious he’s going to go off the rails and take the whole train with him. But structurally, he’s a classic tragic protagonist.

DD: Was it difficult to go back to Paksworld, as your website refers to Paksenarrion’s universe, or did you find yourself slotting back into it easily?

EM: It was much easier than I’d expected, even though I’d lost the continuity notebooks that I put in a “safe place.” (Someday they’ll show up. I hope.)

DD: In between the two Paksworld series, you collaborated with the late Anne McCaffrey on The Planet Pirates series set in a space-traveling future and wrote a couple of series with interplanetary travel of your own, The Serrano Legacy, which includes the Heris Serrano and Esmay Suiza novels, and Vatta’s War. What draws you to interplanetary societies as settings?

EM: The chance to explore different ways societies might work and side-step reader assumptions that often block clear thinking about ones on this planet. The Serrano Legacy books dealt with (among other things) the social/political/economic effects of artificial longevity, human cloning, and “designer babies.” Backgrounding Vatta’s War were technology monopolies and human modification (humods) leading to discrimination aimed at (variably) those with, or without, visible mods.

EM: Similar: All are born into affluent families with strong traditions, and each transgresses that tradition in some way. All are intelligent, capable, active, resilient, with high standards for themselves. All have potentially fatal flaws to overcome. All have conversations with other women that are not about a man. Stella and Ky have been sparring since childhood.

Heris Serrano is about 40 in Hunting Party, the first book of the Serrano/Suiza books; she thinks and acts like a middle-aged mid-career officer, not a youngster. Excellent tactician, excellent organizational skills, natural leader. Her family is solidly military, so she was brought up knowing things about RSS military culture that others have to learn. Less comfortable with civilian culture. 100% insider, until she crosses paths with a villainous senior and resigns her commission. Most comfortable where SOP works, but flexible enough to go beyond.

Esmay Suiza is about 23/24 in her first appearance, a graduate of the RSS’s officer training; though her father is a general, it’s in a different kind of military and her culture does not approve of women being military. Her home planet is not important enough to have a seat in the Familias Regnant legislature, so she’s seen as “colonial” and thus inferior and suspect. 100% outsider and has the least self-confidence because of this. Crises bring out her best; she functions brilliantly as an independent or small group leader when others falter.

Ky Vatta is 21, not an Academy graduate due to a mistake her last year in her planet’s space academy; her family background is mercantile, not military. Comfortable in both civilian & military culture. Some of the time she’s operating outside the law (not unheard of in her family.) Best strategic sense of the three, sound tactical sense, can think outside the box even in crisis.

DD: What inspired your 2003 Nebula Award winner, the standalone novel The Speed of the Dark?

EM: Bringing up our autistic son and some truly awful books and stories about autism.

DD: Is there a single factor you would say is essential in writing short fiction but not as important in novels?

EM: Having an idea-generator that comes up with nice tidy short-fiction length ideas. Mine comes up with big, sprawling, rapidly expanding ideas that need way more room. I’m tempted to think people naturally lean one way or the other, but then there’s Ursula K. LeGuin, and Neil Gaiman….

DD: Now that Paladin’s Legacy is winding up, will you be going back into any of your other series anytime soon?

EM: Other series so far have failed to provide the right story-generator. This may well be related to my father’s death in the spring and the months of rapid decline in his health that preceded it.

DD: What advice would you give new writers just starting out?

EM: Write the story you most want to read. Write more stories you want to read. And if you haven’t already, get out and do stuff: learn skills, meet people, cultivate awareness.

EM: I have stories in three upcoming anthologies: “First Blood” in Shattered Shields, edited by Jennifer Broznik and Bryan Thomas Schmidt, from Baen (the e-ARC has been available several weeks now), “Mercenary’s Honor” in Operation Arcana, edited by John Joseph Adams and due out from Baen next spring. Both those stories are set in Paksworld.

“Tradition,” my alternate-history WWI story, will be reprinted (it’s an e-book, though) in the SFFWorld anthology Wars to End All Wars: Tales from the Trenches, edited by N.E. White, which is already available. In addition, I’ll be putting out a collection of Paksworld short fiction, some reprints and some new, in late fall.

And I’ve started another novel, in the hopes that the plot daemon is ready to go back to work…but I’m not talking about it until it picks up speed. I had several false starts over the winter & spring.

DD: Thank you for joining me today.

EM: It was my pleasure. Thanks for asking me.