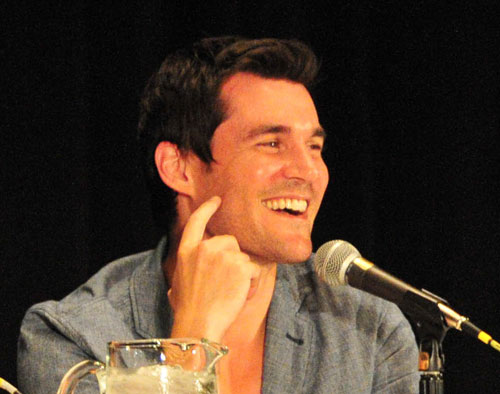 Firefly and Serenity fans know Sean Maher as Dr. Simon Tam, the most devoted brother and best-dressed surgeon in hundreds of worlds. Next week, Maher will premiere his performance of Don John in Joss Whedon’s adaptation of Much Ado About Nothing. Grinning and freshly caffeinated for his second Dragon*Con, Maher sat down with the Daily Dragon to chat about siblings, Shakespeare, storytelling, and the con experience.

Daily Dragon (DD): Do you have any favorite costumes from what you’ve seen so far?

Sean Maher (SM): When I was here the first time, there were a lot of Pan’s Labyrinth ones, which were extraordinary. I always love the Alice in Wonderland ones as well.

DD: If you could cosplay, what would you do?

SM: I’m a huge Lord of the Rings geek, so I’d probably want to delve into that.

SM: I think Simon, as with most characters, is always a part of me. I get so invested in the work that I do. But I think Simon especially because of events like this. One of the things that I love about attending these events, especially during the Q&As, is when people ask me a question about a certain aspect that as an actor I didn’t even know I was doing. As an audience member, you see things that I don’t consciously manipulate and put out there. I just present a character who I try to live and breathe as truthfully as possible. So it’s really lovely for me when people say they loved an aspect of Simon, and it’s something I never really thought about. What I loved so much about him was his love for his sister, but for me that was just so internal. I didn’t think that other siblings who were watching it were going to say, your commitment or your compassion for your sister. I wasn’t purposefully trying to portray that. When stuff like that resonates, it’s a reminder for me what was going on as an actor creating a character, those layers—layers and layers and layers!—of who the person was. To come here, it’s very easy to remain in the mindframe of that character.

SM: I truly just feel like I’m telling a story, regardless of genre. That’s usually how I pick my roles—story first and then character. If it resonates with me, if I feel like it’s something that needs to be told, and if I feel it’s relevant, those are usually my deciding factors. I don’t go “drama” or “comedy”—I’m just telling a story. There are certain elements of sci-fi that you’re not going to deal with in straight drama or comedy, like working with a green screen or the futuristic jargon. With Simon, all the medical stuff that I had to do didn’t even exist, so I couldn’t even do research to figure out what the hell I was doing! But work is work. People ask, “TV, film, or theater?” But it really just comes down to the script. I like to explore all options, and if something speaks to me, that’s what propels me forward.

DD: So you’re also in the upcoming film Much Ado About Nothing—the most fun, banter-filled Shakespeare play—directed by Joss Whedon! Can you talk about what that was like?

SM: It was terrifying but exhilarating at the same time. It was remarkable. Who other than Joss Whedon can say, “Hey, I’m just going to throw together a movie?” He just sends out emails and hundreds of people flock to him. We shot it in 12 days, which was scary. I had never done Shakespeare, so I was mortified. When I’m working with Joss I just want to do right by him. I always want to do the best that I can. Then to be surrounded by actors that had all known him and worked with him, and in the limited amount of time that we had, there really was very little room for error. He said, “You have to know your words. I’ll do a few setups, I know what I want. We’re going to get through a scene, you may have three or four chances to do it. That’s it.” Each scene—not even takes! As scary as that was, it was so exhilarating because it was literally like he was filming live theater. Every single actor showed up, knew their words, and knew what was going on. Everyone was ready to work and everyone wanted to be there because it was a passion project for him, and you couldn’t not get infected by that energy. I got goosebumps when we cut! It was wonderful. Really, really wonderful.