I caught up with literary guests Ann and Jeff VanderMeer in the Exhibition Hall while they were signing their newest book, The Steampunk Bible. A guide to all things steampunk, the Bible showcases all aspects of the genre, from literature to fashion to beautifully wrought objects.

Daily Dragon (DD): What are your favorite pieces of Steampunked-up technology?

Jeff VanderMeer (JV): I think this positronic brain thing is becoming my favorite because we didn’t know about the parts it’s made of. But at the Steampunk Expo there were all these ex-engineers saying “Oh, that’s this, this is the other.” Someone who was in the Navy said that this [circular] part is very reminiscent of something she saw when she was aboard a Navy destroyer and that this box is actually something they would use to tune old TVs in the 1930s. I thought that was really cool. [I liked having] people come up and interact with it and give their take on what it was. I was surprised that there were so many ex-engineers coming up there. But that’s probably why they were at the Steampunk Expo in the first place, because they like the tinkering and the stuff. 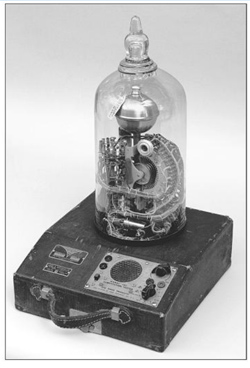 DD: So, it’s a positronic brain? What does it actually do?

JV: We had it commissioned for The Thackery T. Lambshead Cabinet of Curiousities and Annalee Newitz from io9.com wrote a short story in which she made it into a cultural adapter. It’s used if you’re entering into negotiations with someone and you’re not at all the same culturally or on the same page. It transmitts in such a way that you suddenly understand the person’s culture instead of just their language.

I also like the really large pieces like the steampunk elephant, which is a big favorite of mine. 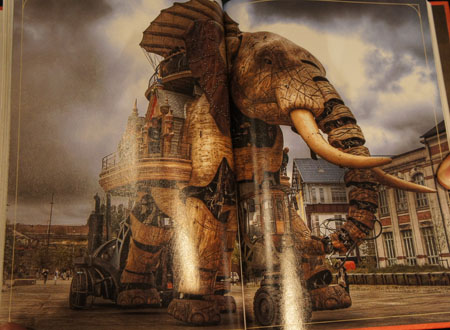 DD: This is a real thing?

JV: This is real. It’s partly hydrolicly driven and partly on wheels. But the feet move and everything.

Ann VanderMeer (AV): The elephant is probably one of my favorites, too. We actually saw it in real life. Jeff and I were guests at the Utopiales conference in Nantes, France in 2007 and saw it.

JV: We didn’t know it existed. We were walking along and saw this huge elephant walking in the distance and said, “What the bleep is that!?”

AV: Nantes is where Jules Verne is from; that’s where he lived. The elephant is only one of the things that they have. They had a huge crab and all kinds of other mechanical animals. [The museum there] would have multiple people taking months and months to build them.

DD: The steampunk world seems somewhat divided between the people who enjoy the aesthetic and those who enjoy the fiction. But now that the costume wing of the culture is getting so much attention, do you think it’ll benefit the fiction?

JV: I do think it’s cool that now editors can say the word “Steampunk” to their marketing departments and they can sell a book. I think you’ll see a lot more interesting stuff being published that might not have been published by commercial presses before. Just like when the term “New Weird” came out–it meant that more interesting stuff was being published by big houses like Harper Collins that would have never gotten picked up. With steampunk you’ll have [the Neo-Victorian] but also more serious stuff. I know Nisi Shawl is working on a steampunk novel set in the Belgian Congo. I’m looking forward to that.