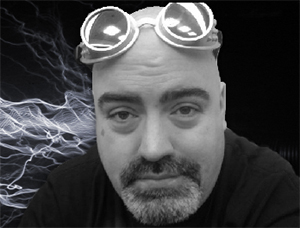 Kyle Hebert is an American voice actor best known for his roles as Teen Gohan and the Narrator in Dragon Ball Z, Ryu in Street Fighter, Aizen in Bleach, and Kiba in Naruto. He talked with the Daily Dragon about some of his experiences as a voice actor.

Daily Dragon (DD): What made you first want to be a voice actor?

Kyle Hebert (KH): A lifelong love of cartoons, the Looney Toons in particular. I remember when I found out that Mel Blanc voiced all of those characters I was just amazed. Besides which, doing silly voices just comes naturally to me.

DD: What’s it like being a fan of anime and a professional voice actor? Do you ever end up watching the shows or playing the games that you voice for?

KH: It’s indescribable to be a part of something you’re a fan of first. It’s cool to be a nerd now. And I think we live in a time where it’s cool to admit to being a nerd in public, as you can see by everyone here.

DD: What are the pros and cons of working on anime dubbing relative to video games or other types of voice work?

KH: Anime is harder and pays less. You have to match the timing of the Japanese dub so it has to be very precise. Video games you just get a window of how long the line needs to be. But in both of them you record solo.

DD: Many of your roles are similar demographics of characters; Gohan, Aizen, Ryu, Kiba, etc. Do you find that you get typecast as particular characters or are you still able to get a broad range of roles?

KH: I’ve been fortunate to still have a pretty wide range, especially of background characters. It’s a lot of small parts, but it’s still interesting. For those kinds of parts it’s easy to just bring in someone who knows what they’re doing. They can just go: “We know Kyle’s good for it.”

DD: Acting always involves a lot of auditioning. As you’ve become more established have you found more work coming to you or do you still get most parts by auditioning?

KH: I still spend most of my time auditioning. I am booking more work now though, and I do get called in for more auditions.

KH: No, I don’t have a regular practice routine anymore. But I recommend studying commercials. It sounds silly, but it’s a great source of income. Besides that, just build your confidence and practice, practice, practice. And be patient–it’s not gonna happen right away.

DD: As a popular voice actor you’ve become something of a convention regular. Do you have any favorite convention stories?

KH: Actually yeah, just today here at Dragon Con a fan came up to me in the Walk of Fame. He said that my performance as Kamina (Gurren Lagann) really had a big impact on him. He had been struggling with depression and my role as Kamina really made a big difference for him.