This weekend I had the privilege to spend time with two of Dragon*Con’s esteemed literary guests, Alethea Kontis and Leanna Renee Hieber. In addition to offering up wisdom on panels and promoting their latest publications, they’ve made sure to enjoy the fannish aspects of the con as well. They stopped by the Daily Dragon on their way from the Yule Ball to the Time Traveler’s Ball for a quick chat.

Hieber, author of The Perrilous Prophecy of the Guard and Goddess, is releasing the first book in her Magic Most Foul YA series in November. She describes it as “gothic Victorian paranormal stuff in 1880s New York City.” She’s also working on the musical adaptation of The Strange and Beautiful Tale of Miss Percy Parker, and is workshopping it in New York with Broadway talent this November.

Kontis gave me an exclusive on her next project. She’s collaborating with Eisner-award winning artist Janet Lee on A Is For Alice, an alphabet book due out this winter. Enchanted, her fairy tale novel, will be out May 8th from Harcourt Books. 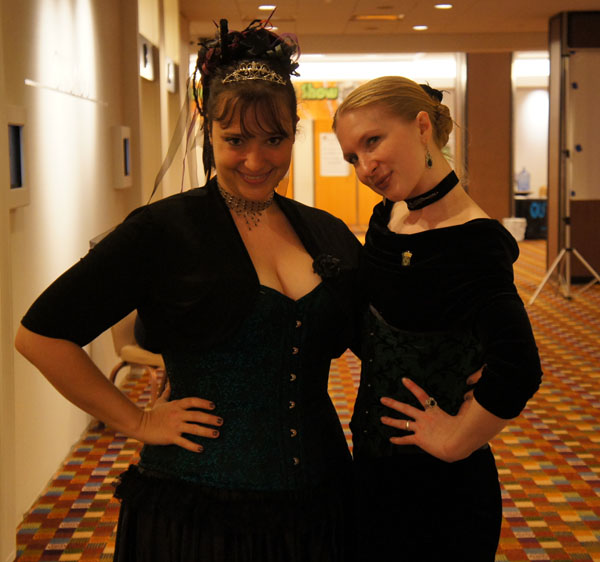 Daily Dragon (DD): I see you just came from the Yule Ball. Who are you dressed as tonight?

LRH: You’re a Potterhead but I probably beat you on the obsessiveness.

AK: I volunteered at Barnes & Noble when the 7th book came out and did the whole nine yards. But you were the Guest of Honor at the convention, so you win.

LRH: Yes, I was a keynote speaker at Aeternitas, which is a new and awesome Harry Potter convention. I was asked to speak about “From Fandom to Fiction.” I was happy to speak on that and also to represent Narcissa Malfoy throughout the entire convention.

I’m a rampant Slytherin. But I’m one of those perky Slytherins who would be on the Slytherin House public relations committee for trying to improve inter-house relations. Because I really do feel like, on the whole, we Slytherins are misunderstood.

Anyway, Alethea was there escorting me to the Yule Ball. And I will note that she is dressed in black and green, per my orders.

DD: Do you both cosplay often?

LRH: Oh yeah! [laughter] Though I really don’t see a difference between clothing and costuming.

AK: Right! I call it ‘light goth attire.’ But I’m not necessarily dressing up as someone. I’ve had people say, “Who are you dressed as?” and I say: Me! I just wore a pretty dress to a convention.

LRH: I’m a reincarnate Victorian, so I’m always using elements of Victorian style in my everyday wardrobe. For me, it’s just a matter of degrees.

I definitely like to cosplay Narcissa Malfoy, and I cosplay the second Romana from Doctor Who.

AK: And at some point in time we are are going to cosplay Anne of Green Gables and her bosom companion Diana. Because look at us! [laughter]

LRH: We so are that in real life.

DD: What is it like being a literary guest and a fan at the same time?

AK: Dragon*Con was my very first convention back in 1996 when I was a bookseller at WaldenBooks. They used to have a retail day on Thursday. If you were a bookseller, you could come visit all the publishers who had booths. It was almost like a mini [Book Expo America]. We would have dinner with the authors and I was so shell shocked and it was wonderful.

I started out as a fan and I went to all the panels and got things signed and stood in all the lines and everything. But I haven’t been to a panel in five years–this year I finally got to go to one again–because being a guest is so different. It’s one thing to watch the parade, it’s another thing to be in the parade. You still experience all of these things but you can’t go backwards.

I can’t stand in line for a panel now because I’m on a panel and I don’t have the five hours free. I miss being a fan now that I’m on the other side of the velvet rope. I’m not knocking it! It’s wonderful. I’m still having a hard time getting used to having fans think I’m awesome, but it’s amazing and I’m not going to wish that away.

LRH: The thing I love about Dragon*Con is that, more than any other convention I’ve been to, there’s an ability to ease in and out seamlessly between being a professional and a fan. I can show up in cosplay mode then sit on a panel as a professional and talk very passionately about my work.

I owe the love and my passion for my writing to my fans. I think that anyone who tries to eschew their own inspiration is doing a disservice, because fandom recognizes fandom. Fandom appreciates when the authors are utterly open about their fandom.

I’ve only been here a few years, but my most loyal fans and readers are the ones that I met the first year at Dragon*Con.

AK: They become your friends!

LRH: Yep. There’s something about Dragon*Con… Despite it’s huge scope and scale, it still can be this intimate, lovely place.