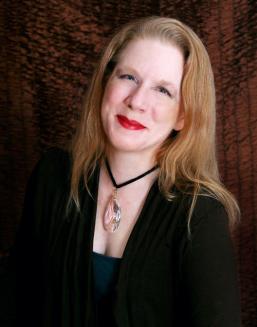 Kathryn Hinds started writing stories early, but her first publications were nonfiction books for children and middleschoolers about various historical cultures. To date, she has written more than 50 of these as well as numerous short stories and poems and several novels. Christy English, author of the Shakespeare in Love series, described Hinds’s 2015 epic fantasy, The Healer’s Choice, as a “lovely, well-written novel with fascinating characters on both sides of the war.”

Hinds did graduate studies in comparative literature with a concentration in Medieval Studies.  She’s currently a lecturer in the English Department at the University of North Georgia.

Daily Dragon (DD): What inspired you to begin writing fiction?

Kathryn Hinds (KH): In the words of Nanny Ogg in Terry Pratchett’s Maskerade, “Let me through, I’m a nosy person.” I’ve always wanted to know what motivates people, what’s really going on in their heads and hearts, what their background is, where they’re going—and if I can’t find out, I satisfy my curiosity by making up a story.

Similarly, when I was growing up, I often felt like the books I read and the movies and TV shows I watched left too many unanswered questions. (Actually, I still feel that way a lot!) What did the princess do after the happy ending? Did Penelope really spend all her time weaving while Odysseus was away? Could a girl be a troubadour? Where are the female Jedi?

When I read history, I had the same kinds of questions, and if research couldn’t tell me everything I wanted to know about, say, the woman pharaoh Hatshepsut, I would imagine a story for her. And eventually I realized there just weren’t enough books telling the kinds of stories I imagined and wanted to read, so I had to start writing them myself—in a way, I guess you could say that it’s untold stories that inspired me to start writing fiction.

DD: You have a wide-ranging academic background. Please tell us a bit about that.

KH: I went to college intending to be a theater major (musical comedy and Shakespeare!), but ended up in an interdisciplinary arts major with a double concentration in music and writing; I also took four semesters of Latin, and if I’d started with Latin earlier, I probably would have been a classics major. I went on to do my graduate work in comparative literature and medieval studies because my childhood love of fairy tales had blossomed into a love of Arthurian legends and literature, which got me intensely interested in other medieval literature as well as in Celtic mythology.

In grad school I focused mainly on English, French, and Occitan courtly romance and lyric, but I also took courses in Old Irish and Old Norse, which led me into the older heroic literary traditions as well. This was all great preparation for writing fantasy fiction!

DD: In writing your fiction and poetry, how much have you drawn on your academic studies?

KH: In fiction, I don’t often make a conscious effort to draw on my academic studies, but they’re always in the background—they’re part of me. In my novel The Healer’s Choice, for example, there are two main cultures, and they’re not meant to be analogues of any particular real-world societies. But one culture does have elements inspired by ancient Celtic, Germanic, and Scythian/Sarmatian peoples, while the other draws on aspects of ancient India, Rome, Norman England, and a few others.

In poetry, the academic studies have their usual background, unconscious influence (many of my poems are rooted in mythology), but there’s also a more conscious element. I frequently write poems based on or in response to literary works that I’m studying or teaching. For example, one semester when I was teaching Shakespeare’s sonnets, I was inspired to write a parody of “My Mistress’ Eyes Are Nothing Like the Sun.” Its title and first line are “My Mister’s Eyes Are Nothing Like the Sun.”

DD: Please tell us about The Healer’s Choice.

KH: The Healer’s Choice is about the Kel Nira, a woman who wants nothing more than to follow her calling as a healer, but as head of the healers’ order she is also part of the governing council and cannot avoid political and other entanglements when her country is invaded. She is forced to take on more responsibility for her people’s fate than she ever wanted, and at the same time, she discovers that despite her long-cultivated pacifism and compassion, she is capable of hatred and violence.

As she struggles toward a new understanding of herself and her place in the world, she encounters one of the commanders of the enemy army. He sees her as a way to victory, while she begins to see him as a way to preserve some measure of freedom for her people. The spirits of the land seem to have their own plans for him, though, and draw him ever closer to the Kel Nira—a situation that pleases neither of them.

DD: Will there be a sequel?

KH: Yes! Its current title is The Healer’s Curse. I’m at work on it now, and I’ll be reading a selection or two from it at my reading on Sunday (1PM in the Roswell room at the Hyatt).

DD: Did you set out to create the collection of poems that became Candle, Thread, & Flute, or did that come about gradually?

KH: It came about gradually. Candle, Thread, & Flute is a selection of my favorites of the poems I had written over a period of several years. Once I started putting the collection together, though, I realized that there was a lot of thematic unity in the poems, especially when I divided the book into its three sections, “Masks and Voices,” “Turnings,” and “Water and Other Elements.”

DD: What is The Forty, and what inspired it?

KH: The Forty is a book of photographs and short stories that re-imagine the story of Ali Baba and the Forty Thieves. The photographs are by my friend Fox Gradin (www.celestialphotography.com), who came up with the concept. It began as an art exhibit, with pictures of 40 different ne’er-do-wells from different times, places, and cultures—her idea was that Ali Baba was a time traveler who recruited these rogues from everywhere and everywhen—and Fox and I worked together to write captions that gave each thief a name and a bit of background. The exhibit was a success, and a lot of the people who saw it told her she should turn it into a book. So she recruited James Palmer (https://jamespalmerbooks.com) and me to expand those captions into short stories. This may have been the most fun I’ve ever had as a writer!

DD: How does your six-volume series, Creatures of Fantasy, relate to your other nonfiction?

KH: With most of my other nonfiction, each book (or sometimes book series) has stayed focused on one particular culture and time period—Elizabethan England, New Kingdom Egypt, the Vikings, and so on. For Creatures of Fantasy, the focus for each book was a particular creature or group of creatures, and I gathered folklore and mythology about that creature from as many times and places as I could. In some ways, this project really harkened back to my studies in comparative literature. A couple of the creatures from these books (one from Unicorns and one from Griffins and Phoenixes) also make an appearance in The Forty.

DD: What do you most enjoy about attending conventions and what do you find most challenging?

KH: I most enjoy the conversation and the costumes. I don’t get too elaborate with my own costuming—sometimes I skip it altogether—but I love seeing others’ costumes and musing about what draws people to particular costumes and characters (remember, I’m a nosy person). The pleasures of encountering clever and beautiful costumes, attending and participating in fascinating panels, and meeting up with friends and colleagues make the size and density of the crowd—definitely the most challenging aspect of a large con—well worth dealing with.

DD: Do you have any advice for writers who’re just starting out?

KH: Don’t worry about what publishers are buying or about what’s on the bestseller lists right now; the trends will change. Just write the stories that you need to tell, the ones that won’t let go of you and that make you feel like you’ll explode if you don’t get them out into the world. And after you write, rewrite: develop your characters, tighten your plot, hone your language—do whatever’s necessary to become the best writer you can be, so that your readers will care about your story as much as you do.

KH: Thank you; it’s been a pleasure!