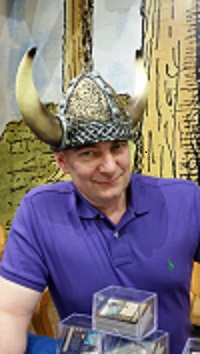 Hugo Award-winning editor and Chesley Award-winning art director Lou Anders has donned yet another hat, a Viking helmet, as he celebrates the release of Frostborn, the first book in his new middle-reader, fantasy-adventure trilogy, Thrones & Bones. Described in its Publishers Weekly starred review as “A powerful, fast-paced tale….The setting is rich, the characters well-defined, and the danger ever-paramount,” Frostborn is now available from Crown Books for Young Readers. Anders, author of over 500 articles and stories on science fiction and fantasy television and literature, is a frequent guest at Dragon Con and met with the Daily Dragon Online to discuss his new role as a fantasy writer.

Daily Dragon (DD): You’ve been an editor of adult and Young Adult (YA) science fiction and fantasy for many years. What motivated you to write a fantasy series for children/middle readers?

Lou Anders (LA):  A number of factors coming together. First, I’m becoming increasingly interesting in middle grade fiction as the place where imagination can be so wonderfully unbridled, fun is required, and action-adventure is the word of the day. Then, while I’m enormously proud of the books I’ve edited over the last decade plus, my own children are a few years away from being able to read them, and I wanted something they could read and enjoy now. And finally, I’m getting interested in works—whether books like The Hobbit or cinema properties like the Star Wars films and cartoons—that can be enjoyed by people of all ages, stories you can come into young and stay in your whole life. That’s the space I want to be in. Frostborn is listed as being for 8-12 year olds, but really it’s proving to be for 8 and up! Way up!

DD: Frostborn is full of Norse settings, culture, and mythology, even a board game. Which features are authentic and which are new, but faithful, to Norse tradition?

LA: Well, all of it! Frostborn is set in the lands of Norrøngard and Ymiria, invented countries in an invented world, but based heavily on Scandinavian culture. So, for instance, the gods that are mentioned aren’t Norse gods, but the actual Norsemen and my Norrønir both enjoy throwing table scraps at fellow diners in a playful attempt to put out an eye and both practice recreational drowning games and call them “swimming contests.”Knattleiker is an actual Norse ball game, but the game of Thrones and Bones is an invention (more on that later). I have trolls, but they don’t turn to stone in the sun like “real” Norwegian trolls. The names of the characters are not historical Norse names but rather Norse-sounding names, because I wanted them to come from a culture similar to Norse culture, not Norse culture itself. 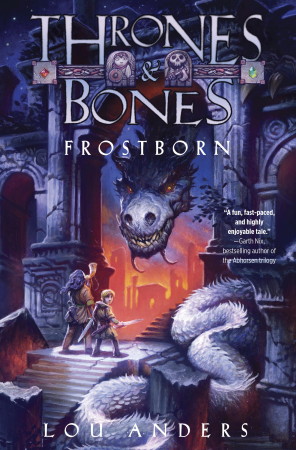 DD: Frostborn certainly appeals to my adult sense of wonder and adventure. Did you have to change or simplify your story to keep it within reach of middle readers?

LA: The story? No. We took the accent marks off the names to make them easier to read, and we eliminated some Norwegian characters from the text. No but we kept the very distinctively Norwegian flavor. But the story is the story I set out to tell, absolutely. And in book two, you’ll see more of the world, visiting new countries and meeting some new characters whose motivations are more ambiguous than you might suppose. If you want to compare reading levels to television, take a look at Saturday morning cartoons and see how wonderfully inventive and just outrageous they can be. It’s prime time TV that gets constrained, with the cable channels like A&E and HBO allowed to do the most unrestricted adult entertainment and the children’s programming being the most gonzo fun. I’d say the cable channels are adult genre fiction, the networks are adult mainstream fiction and YA, and the kid’s programming is the middle grade reader category. Kids are smart, and kids have more willingness—and frankly time—to invest in a story on a deeper level than most adults can.

DD: The illustration of a shield maiden, one of the pieces in the board game Thrones and Bones played by Karn and others in the novel, is reminiscent of the Berserker, one of the Norse-origin chess pieces found at the Isle of Lewis (northwest of the Scottish mainland). Did the Lewis chessmen serve as models for any of the game pieces? What other elements of Norse culture, art, or mythology inspired Thrones and Bones playing pieces, rules, or strategy?

LA: I’m familiar with the Lewis chessmen, though they weren’t my direct inspiration. Before the Norse played chess they played another game, in the tafl family, that was actually supplanted as a pastime when they began to import the game of chess. Thrones and Bones was inspired by this real world game of Hnefatafl, which was an asymmetric game in which a king piece had to escape from a siege force. However, no Hnefatafl rules from the Viking age survive, and my version isn’t based on any one of the reconstructions. It’s a hybrid of what we know of various rules combined with new rules necessary for the plot of the book. As such, it’s not Hnefatafl, but it’s close enough such that you could believe it was an alternate world’s equivalent, which is what I wanted. Book two will have its own board game, by the way, which is already worked out and play tested. It’s not from Norrøngard but another country though. More on that next year!

DD: Are there any plans to release the Thrones and  Bones board game as described in your novel?  If so, where might I buy a set?

LA: I’ve been getting that question a LOT. No plans as of the time that I’m writing this, but I’m hopeful that won’t be the case before too long. There is certainly the interest and a willingness on my part to explore it.

DD: You have shared illustrated cards for Thianna, Karn, Sydian, and a two-headed troll. Will these or more Thrones & Bones cards be available at Dragon Con? Can we expect a trading card game to be available sometime in the future and, if so, do you have an estimate of when and where?

LA: The cards will indeed be at Dragon Con. I’m going to be doing a signing at The Missing Volume booksellers out of their Exhibit Booth (#328, 329, & 330) on Saturday, August 30th. Frostborn cover and interior artist Justin Gerard will be with me, so readers can get the book signed by both the author and the artist. The card art, however, was done by Andrew Bosley, who also did the character art on the Thrones & Bones website. I initially built the cards just to be swag to give away at signings, but I confess my wheels have been spinning as to some actual rules. There will definitely be a “Series 2”down the line, and long term, probably game rules.

DD: What artists are responsible for the art and illustrations for Frostborn and Thrones & Bones? How do the cover art, the interior illustrations, and the card portraits complement the saga?

LA: Justin Gerard produced the cover and interior illustrations for the novel (and the not-yet-public magnificent cover for book two). Kenneth Crossland, the senior designer at Crown Books for Young Readers, did the layout for the cover and interior art. Robert Lazzaretti (of D&D and Pathfinder fame) produced the two maps, one of which is in the book but both of which are on www.thronesandbones.com—and he’s produced four additional, as-yet-unseen maps too!), and Andrew Bosley produced the character art used on the website and the cards. They are all fabulous and my dream is to get them all together with me on a panel at a convention somewhere all at once. Along with my amazing editor Phoebe Yeh. At the dedicated Thrones & Bones convention. Where we announce the multi-picture movie deal. Right before I’m elected president and fight off an alien invasion. (We can dial this dream back a step or two. But only two steps top).

DD: Please tell us about book two and three of the series. When will they be released and, no spoilers, what new adventures and dangers await Karn and Thianna?

LA: Well, this hasn’t been officially confirmed yet, but book two should be released August 5, 2015, and book three the same time in 2016. Book two is on my editor’s desk right now, and I’ve seen Justin’s phenomenal cover for it. Wow! I really don’t want to tell you much about the story though, apart from saying that we visit two new countries, travel across about two thousand miles of the continent of Katernia, and introduce a new major character. Oh, and the weather is warmer where we’re going.

DD: In addition to your website, Thrones and Bones, what other media adjuncts already exist or might be planned for the series? Would the series translate well to an animated or live action movie or serial adventure?

LA: I would certainly be happy with either. Before seeing Peter Jackson’s second installment of The Hobbit, I would have said that it needed to be animation, but now I think it could work equally well as live action or animated feature. And the world is certainly big enough, with enough plans for Karn and Thianna as well as new characters waiting in the wings, that it could sustain an animated television series, along the lines of Avatar: The Last Airbender. When I built the world, I deliberately built it big enough to contain any and all fantasy stories I might ever conceive of, and already there are detailed notes on about thirty countries on the content of Katernia and more on other continents. With histories going back five thousand years, religions for each country, etc…I could tell any story you want, in any kind of medium—comic books, anyone?—for years and years and years.

DD: Just to be on the safe side, how may I get in touch with Eggthoda to get a charm against the undead warriors called draugs and other Norse monsters featured in Frostborn?

LA: The druids’ college near Cathnalfway in the country of Araland has been considering ways they could safely enlist her in their visiting faculty program, to teach a course on ice magics, but that’s a long way south for a frost giant to travel. I will let you know if they manage to work out the logistics.

Anders’s research on Norse mythology while writing Frostborn turned into a love affair with Viking culture and a first visit to Norway. He hopes his series will appeal to boys and girls equally. A prolific speaker, Anders attends writing conventions around the country. He and his family reside in Birmingham, Alabama. Learn more about Anders and his new saga at Thrones and Bones.

You can also visit Anders at his Dragon Con panel appearances and at the Prometheus Books/Pyr booth in the Exhibit Hall, Booth# 424 & 425, or online at Lou Anders, on Facebook, and on Twitter at @ThronesandBones.