Michael Dorn is one of the few Star Trek actors who got to play his role across multiple shows and even multiple generations. He originated the role of Worf on Star Trek: The Next Generation, got to play Worf’s grandfather (also named Worf) in The Undiscovered Country (which took place during the era of the original series), reprised the role of Worf in all of the Next Generation-era movies, and continued Worf’s story on Deep Space Nine once TNG ended. Since the DS9 finale he’s kept busy with guest star stints on Heroes and Castle and multiple voice-over roles for TV, movies, and video games. The next role he plays may be up to you. 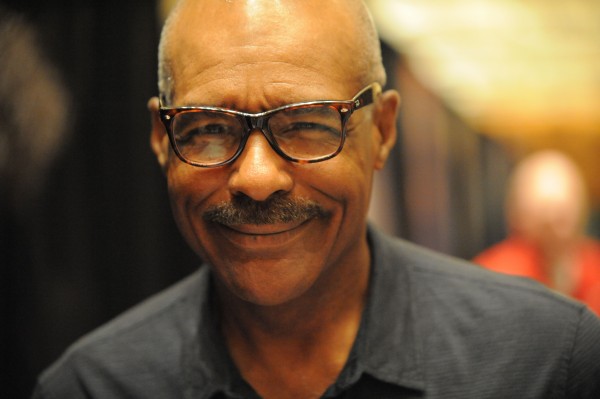 Dorn is part of a crowdfunded project called Swallow Your Bliss that is currently looking for backers. You can learn more about the sitcom, described as “30 Rock meets Gordon Ramsay in stilettos,” on IndieGoGo.

Michael Dorn (MD): No, I tried to do something for a project that I wrote called “Through the Fire” last year through Kickstarter. It was a learning experience. I had a theory that Star Trek fans would support a project that wasn’t Star Trek-related or science fiction-related. I was wrong. [laughs] Still, it was a great experience. But fans want to see something genre. If it’s in the genre, I think [a crowdfunded project] has a better chance [with Star Trek fans]. If it’s not in the genre, then you have to be very frugal with how much you’re asking for. It’s better to ask for a little and get a lot than to ask for a lot and get a little.

DD: I noticed that you’re not on any of the Deep Space Nine panels at Dragon Con, why is that?

MD: I think that was just a lapse. I don’t think it was anything deliberate. People just didn’t think about adding me.

DD: You could still crash the last one.

MD: Thing is, I love DS9, I love the actors, I had a really good time with them, I really respect them. The show is wonderful and their contribution is wonderful. I wouldn’t feel comfortable crashing because I kind of crashed the series.

DD: Only a little! Next Generation fans were happy to see you.

MD: No, no, it was a big crash. A big, big crash. If you looked at all the publicity that I got before I came on, it was huge. TV Guide covers, articles like ‘Is Michael Dorn Going To Save DS9?’ I think the show was great on its own. That’s why I don’t want to crash their panel: ‘Hey, it’s me again! The asshole.’

DD: Speaking of Worf, I’m dying to hear about this Captain Worf show I keep hearing about. Because there are conflicting reports.

MD: I’ll tell you the whole story. Last year, I was talking to a blogger, and he asked what I thought about another Star Trek TV show. I said I think there’s always room for Star Trek on television and I had this idea about a show about Worf. Not just Worf, but the Klingon empire. Because we love the Klingon empire. They’re very Shakespearean… very honorable (sometimes).

The guy blogged about it and it went, not viral, but lots of people heard about it. A couple of producers called my agent and said they wanted to be a part of it. We had a couple of meetings and we were all aware of the possible hurdles of dealing with CBS/Paramount since they own the show. But they made some calls and people were going, “this is a good idea.” We were buoyed by that, so I wrote the script. I think it’s a great script. I really do! After that, when I was getting close to finished, the [Star Trek: The Next Generation] Blu-ray was coming out. The people who were doing the Blu-ray called and wanted a meeting. They wanted to do a 30 minute proof of concept. It was exciting because it looked like it was going to happen.

And then they went to CBS/Paramount and something happened and it stopped.

It’s very much a business now, it’s not as much a creative entity. They look at numbers, they look at deals, and they have a deal with J. J. Abrams. That whole thing is a juggernaut right now, his movies have made a lot of money, and they just didn’t want to upset the apple cart. I think that’s what happened.

But, it’s not dead! The fans would all love to see it. But will that translate?

DD: I think it will. And since there are now multiple Star Trek universes, wouldn’t it be fun to set the Captain Worf show in a universe where Jadzia Dax didn’t die and you and Terry Farrell were awesome across space together?

MD: The thing is, the story’s about the Klingon Empire moving on. It’s tough enough to write a story without trying to bring somebody back from the dead.

DD: It would be an alternate universe where she never died.

[Let the record reflect that Michael Dorn then shook his head with a Child, Please look on his face that made me laugh.]

I read that, since you played Worf for 11 years, you’ve been in more episodes than any other actor in the Star Trek universe. It must be an awesome feeling.

MD: It was brilliant. I didn’t realize it until the very end. I didn’t know how many episodes I’d done until someone said I did 278 episodes. And five movies. I went: wow. A good friend of mine, Bob Pine (Christopher Pine‘s father), said: ‘You know, Michael, you have to think about the fact that you created a character that’s going to live forever.  Not only in science fiction, but in the whole TV/movie culture. Someplace, somebody knows Worf.’ It’s very interesting to think about that. Especially because I loved the original show. It was amazing to be part of that.

There was a great moment when we were filming The Undiscovered Country—the Khitomer scene—and the entire original cast were there sitting in their chairs and on the other side were all the guest stars sitting in our chairs. And I just looked over and went: Holy shit! These are the people I grew up with. And here I am. It’s unbelievable for a little black kid from Pasedena. It was just an amazing moment and I’ll never forget it.

Michael Dorn doesn’t tweet much (“social media is not really my thing…”), but when he does it’s from the awesomely named account @akaWorf.