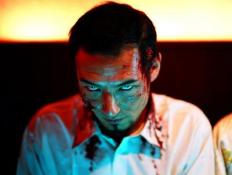 Boss Watanabe is clinging to his sanity and control of Kyoto’s yakuza after Boss Aihara massacres most of his men in a sneak attack. Holed up in a dingy bar with Uchida, his lieutenant, Watanabe starts to see the mutilated ghosts of his dead soldiers. The specters blame him for their deaths, and they want revenge. Terrorized by both his inner demons and the threat that Aihara’s thugs will find him at any minute, Watanabe has only one way out: he hires K, an alluring American hit woman, to assassinate Aihara. For the right price, K will kill anyone. Even her own client.