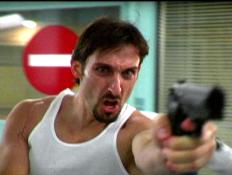 Ex-con Jack Norris has cleaned up, gotten a real job and even met a nice girl. One cold night, he falls asleep at the wheel of his car, with his wife besides him.

Jack wakes up in a hospital and realizes he’s been in an accident and that his wife is in critical condition. As he slowly goes in and out of consciousness, under the spell of morphine, he thinks he sees a nurse euthanize another patient.  When Jack tries to tell the doctors what he saw, no one believes him. Fearing for the safety of his wife, Jack decides to take matters into his own hands.