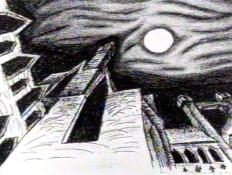 This animated horror-fantasy film uses delicately rendered black-and-white images and dark atmospheric music to evoke a mood of impending doom that hangs upon the unsuspecting inhabitants of a medieval castle who do not realize that sometimes, the dead are but lightly sleeping.

Related in this short but spellbinding film is the tale of the disembodied head of a fallen mage which haunts a king and his household in their own castle.
(Web Site)