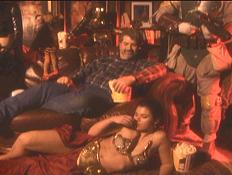 While working on his new Star Wars television series, George Lucas finds himself interrupted by Studio corporate execs who think they know better than the creator himself how his show should go. The execs find that pitching Lucas might not be as good idea an idea as they think, and not all ideas are good ones.
(Web Site)