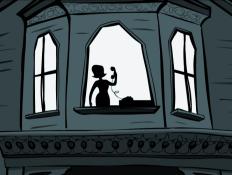 A woman, apparently alone in her house believes there may be an intruder. The viewer shares her fear and is never certain whether or not there is an actual intruder. As the woman grows increasingly paranoid, the suspense grows and various filmic elements, such as tempo, composition, set design, color palette, and camera angles change to match and heighten the mood. Is the woman delusional or is someone really trying to terrorize her? This film is inspired by film noir tradition, where various elements such a light and dark, shadows, camera angles, and sound are manipulated in an expressionist manner to amplify the emotion of a scene.
(Web Site)