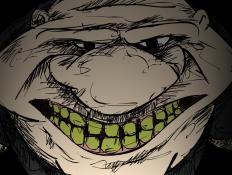 In the underworld of the New York City subway system, one man struggles with madness for a chance at love. Presented as a disjointed sequence of fantasies, When the World Goes Dark is a chilling reminder that the everyday and commonplace can be as grotesque as it is absurd. In the end, only one certainty remains: this macabre delusion is not only on screen, but within our own minds.